Community rallies round after motorbike theft 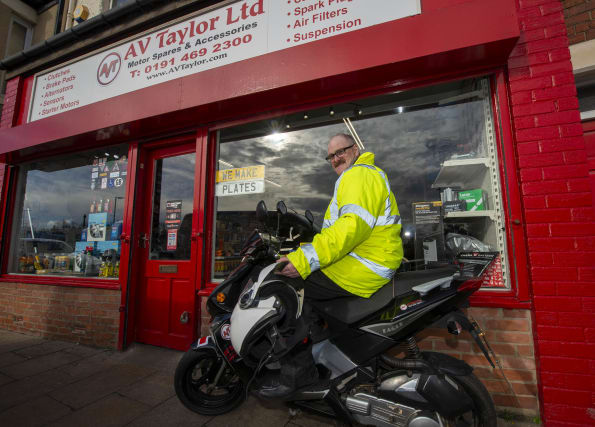 A vulnerable motorcyclist whose bike was stolen has been overwhelmed after his kind community rallied around to get him a brand new replacement.

Keith McKeown, who is 56 and has learning difficulties, was devastated when thieves stole his Honda from outside the AV Taylor bike shop in Pelaw, Gateshead.

He had only owned the motorcycle for six months when a group of teenagers broke the steering lock and wheeled it away in January.

Police investigated but could not identify the thieves, so staff at the shop decided to give Mr McKeown a brand new replacement 125cc scooter.

They had been running a raffle for the bike but contacted customers and asked them if they would mind if the prize went to Mr McKeown.

Those who had entered the raffle agreed, with the shop making up the rest of the cost, along with other local businesses chipping in.

Mr McKeown’s sister Julie, who is his carer, said: “He has ridden a bike for many years now and had only had this bike for six months.

“He was inside the shop when a woman came in and told him his bike was being stolen. He tried to chase them but he couldn’t catch them.

“Keith was devastated that it was stolen. He absolutely loves his bikes and he was really, really upset by what happened.

”But he was really grateful for what the shop did and is really pleased to be able to ride his scooter again. I just want to say thank you to the shop and everyone who donated.”

Detective Constable Sarah Rose said: “I am really pleased that Keith has been donated a new motorcycle as I know he was badly shaken up by what happened to him.

“He is obviously a popular figure in the local community and lots of people know him from the time that he spends around the shop.”

Mr McKeown’s stolen bike was a white Honda worth around £3,000 and anyone with information is asked to call 101.