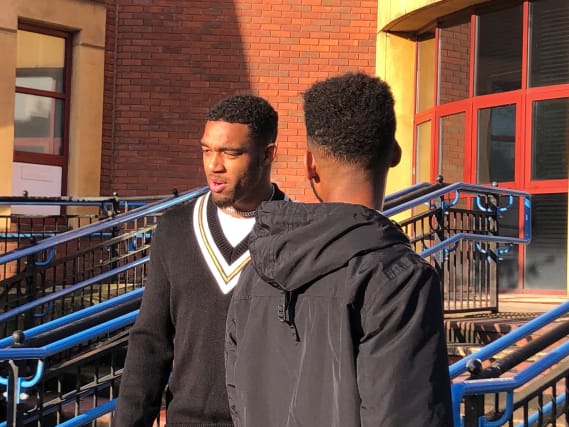 A Premier League footballer who crashed his Bentley into a coffee shop causing thousands of pounds of damage has been banned from driving and fined £7,500.

Bournemouth winger Jordon Ibe, 24, also struck a Mercedes car when he smashed into The Pantry on Plaistow Lane in Bromley, south east London, shortly before 5am on July 30.

Ibe, who drove off after stopping briefly at the scene, admitted a charge of careless driving and was found guilty of one count of failing to stop after an accident at a court hearing in February.

He was handed a 16-month driving disqualification and 12-month community order at a sentencing hearing at Bromley Magistrates’ Court on Tuesday.

District judge Catherine Moore also ordered him to pay a £7,500 fine and £500 compensation to those affected by the crash, as well as a £181 surcharge and £775 in costs.

At the start of proceedings Prosecutor Bina Morjaria read out statements from victims, including one by mother-of-three Sarah Dixon, shopkeeper at The Pantry.

“I was shocked at the damage to the front of the shop, I thought we had been robbed,” she said.

Ms Dixon added: “I was devastated. Financially I knew that the damage was enough to make the shop close for several weeks.”

The court heard the damage to the shop was so extensive it had to shut for six weeks, with the owners fearing they would go out of business.

Ms Dixon’s husband had to sleep in the shop overnight while its recently renovated frontage was made secure, and staff could not be paid during the closure.

“I’m dismayed that someone who is as high profile as he is has not even tendered an apology to us,” she said.

Philip Lock, owner of the damaged Mercedes, said he had to pay more than £2,800 to have it repaired.

The court also heard that he already had 11 penalty points on his driving license.

Ibe, wearing a black puffer jacket over a white top, spoke only to confirm his name, date of birth, address and British nationality during the hearing.

He sat looking at the floor of the court room dock as mitigation was provided by his lawyer Frank Rogers, who told the court that Ibe accepted his driving was sub-standard.

Mr Rogers said that Ibe had spent much of his life “cocooned in the artificial world of football” which had left him “not well-educated” and “ignorant of his duties”.

He added Ibe had stopped at the scene of the crash for “a period of time” and returned to the coffee shop that afternoon to find it closed. He later voluntarily entered discussions to agree compensation.

Mr Rogers said Ibe’s early career, signing for Liverpool on his sixteenth birthday, had not become “what everybody might have expected” and faces his contract with Bournemouth expiring in the summer.

He also said Ibe was the victim of an armed robbery in 2016 where “armed criminals” crashed into his vehicle and “threatened him with guns and a machete”, which left him “fearing for his safety”.

Judge Moore said Ibe had been driving too quickly and “became distracted”, adding he “did not stop at the scene for long enough”.

She also handed Ibe a 12-month community order, including 150 hours of unpaid work.

In a statement read by Mr Rogers to journalists after the hearing, Ibe said: “I accept full responsibility for my actions and lack of judgement when driving.

“I apologise unreservedly to those whose property I damaged.”

He also apologised to his family, teammates, fans and manager Eddie Howe.

Ibe joined Bournemouth from Liverpool for a reported £15m fee in July 2016.