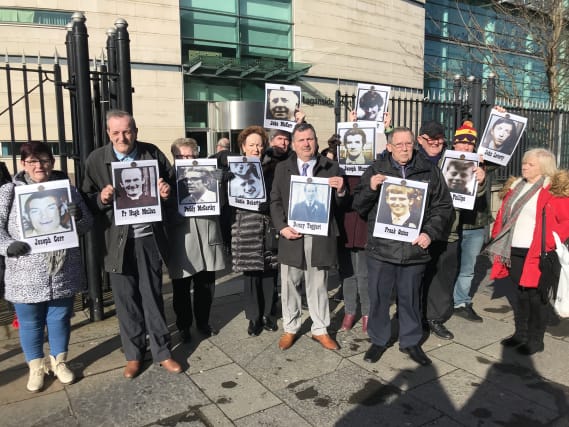 The final oral evidence has been heard in a series of fresh inquests into the fatal shootings of 10 people in west Belfast almost 50 years ago.

The disputed shootings happened across three days at a turbulent time following the introduction of internment in Northern Ireland on August 9, 1971 which was met by large scale disorder.

Ten people, including a mother of eight and a Catholic priest, were among those shot dead in a series of incidents between August 9-11, which have become known locally as the Ballymurphy Massacre.

The families of those killed contend they were innocent, unarmed civilians shot by soldiers without justification.

Barristers for the Ministry of Defence (MoD) have argued soldiers only ever opened fire when they perceived they were under threat.

The narrative became further clouded in 2018 when the loyalist Ulster Volunteer Force claimed their gunmen had also taken part.

The final scheduled witnesses gave evidence on Monday and Tuesday around the fatal shootings of Father Hugh Mullan and Frank Quinn on waste ground close to an army barracks at Vere Foster school in Springmartin on the evening of August 9.

A former paratrooper, M34 – who had been a member of the anti-tank platoon of 2 Para Support Company, was challenged over whether he had been in possession of a .303 sniper rifle on August 9 at the Springmartin flats.

Giving evidence via videolink on Tuesday, he responded saying he had not had a .303 rifle until 1972 and referred to a photograph which shows him holding the rifle as he sat in a Land Rover during a visit by then Northern Ireland secretary William Whitelaw, which he said, was the first time he had had the weapon.

M34 said he does not recall having been in Springmartin on August 9, 1971.

M71, who was then a second lieutenant with 2 Queen’s, gave evidence in court from behind a screen.

He recalled the unit taking command of observational posts at the Springmartin flats from paratroopers and seeing wooden crosses on waste ground where two people had been shot dead.

He said he did not know then who had been killed.

M2312, then a lieutenant with 2 Queen’s, also gave evidence in court from behind a screen.

He recalled arriving at the Springmartin flats around midnight on August 9, seeing bullet casings on the floor and remarking “someone has had quite a firefight”.

He recalled hearing a “splat against the wall” and a long burst of gunfire before a sergeant major “rolling over in his sleeping bag” and identifying the gunfire as being from a Bren machine gun before “rolling back over”.

On Monday, a former paratrooper rejected a suggestion that he could have fired the shots which killed Father Mullan.

M1270 recalled seeing a gunman crouching beside a metal dustbin and firing a shot at him which caused the dustbin to explode.

Karen Quinlivan, counsel for the Mullan and Quinn families, said she does not accept gunmen were present.

She put it to M1270 that the shots which killed Fr Mullan could have been fired either by him or one of the soldiers with him.

“I disagree,” he responded, and suggested the priest had been killed in “cross fire”.

Mrs Justice Keegan said at the close of Tuesday’s hearing that she anticipated that would be the end of the oral evidence.

Medical reports are to be received in relation to two military witnesses who have requested to be excused from giving evidence in person.

“There may be other little bits and pieces that I have to work out and I will obviously be reviewing as I go on … but I anticipate that is really the end of the oral hearings after a long period of time,” she said.

“There will be ends to tidy up, I will be working on this fairly intensively to try and get something to all of you in the next number of months.”