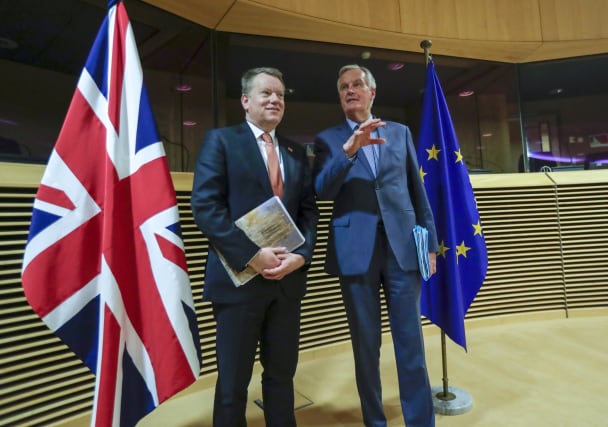 Opening positions set out by the two sides ahead of the negotiations suggested that there are major differences on issues including fishing rights, Brussels’ demands for a “level playing field” to ensure fair competition and the role of the European Court of Justice.

At the European Commission’s Berlaymont headquarters in Brussels, Mr Frost was joined by the UK’s ambassador to the EU Sir Tim Barrow and a team of aides.

Mr Frost and Mr Barnier chatted and posed for photos, clutching bundles of papers ahead of the opening session.

Talks are expected to continue until Thursday, with a further set of negotiations planned in London later in March.

The UK is refusing to extend talks beyond the end of the year and has warned it will walk away without a trade deal rather than see the process drag on.

A high-level meeting to take stock of progress is scheduled for June, by which time it should be clear whether the Canada-style trade agreement sought by Mr Johnson is possible by the end of the year.

The UK’s approach to negotiations states that the “broad outline” of a deal should be apparent by that point, which could then be finalised by September.

If not, “the Government will need to decide whether the UK’s attention should move away from negotiations and focus solely on continuing domestic preparations to exit the transition period in an orderly fashion”.

Michael Gove, the Cabinet minister responsible for overseeing the UK’s exit from the EU, said Britain would not “trade away” its “newly recovered sovereignty” during the talks.

She told the BBC’s Andrew Marr programme: “If we need six more months we, as Europeans, are very clear that we want a good deal, a fair deal, a deal that can last for many generations to come, and we will not sign for the sake of having a deal. It would make no sense.”