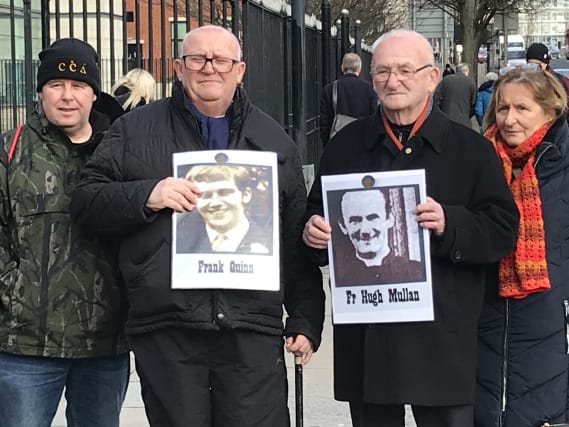 A former paratrooper has recalled firing at a gunman during disturbances in west Belfast which saw two civilians killed almost 50 years ago.

Witness M1270, who has been granted anonymity, was giving evidence at Belfast Coroner’s Court about the events of August 9 in Ballymurphy.

A Catholic priest, Father Hugh Mullan, was shot dead as he tended a wounded man, before Frank Quinn was also killed, on an area of waste ground close to an army barracks at Vere Foster school that evening.

Appearing at a long-running series of fresh inquests into the deaths of 10 people in the area between August 9-11, M1270 described his recollections of August 9.

He was a member of anti-tank platoon of 2 Para Support Company.

Giving evidence via video link, M1270 described taking part in an ad hoc patrol to Mackie’s factory where the nightwatch man had been killed in a bomb attack.

Later that day, he said, the same patrol was sent to Springmartin flats, where he observed three gunmen in Moyard, and fired shots.

He said he assumed the gunmen were firing towards the Vere Foster school.

When asked whether he could not see where they were firing, he described being in a position against a wall, adding that to poke his head out to the left “would have been suicide”.

He recalled seeing a gunman crouching beside a metal dustbin and firing a shot at him which caused the dustbin to explode, before turning to the other two gunmen and seeing they had moved.

Coming under fire again, but this time not being able to see the gunmen, M1270 said the patrol stepped back into cover and he gave a “watch and shoot” order to the other soldiers, before briefing the officer commanding on what had happened.

“There was firing going on all round us,” he added.

The Ballymurphy shootings came during a time of significant unrest, with rioting taking place across Northern Ireland following the introduction of internment in the early hours of August 9.

Between August 9 and August 11 1971, ten people died in shootings at a number of locations in west Belfast, a sequence of events which have become known as the Ballymurphy massacre.

Their families say they were shot by the Army, that each of them was unarmed and innocent, and that the shootings were unjustified.

Barristers for the Ministry of Defence (MoD) have argued soldiers only ever opened fire when they perceived they were under threat.

Fresh inquests have been taking place at Belfast Coroner’s Court since November 2018.

Presiding coroner Siobhan Keegan is expected to deliver her findings later this year.