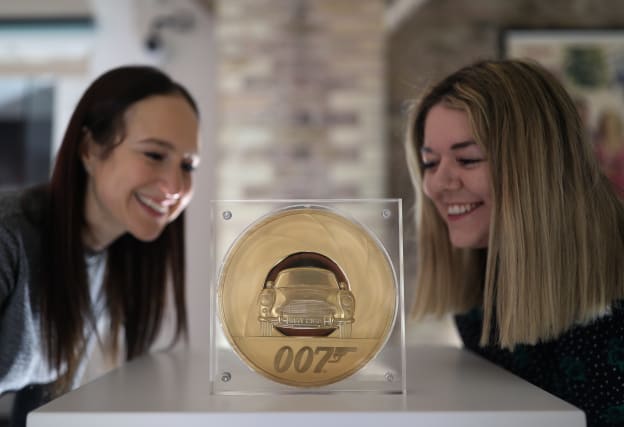 The Royal Mint has unveiled a seven-kilo gold coin with a face value of £7,000 as part of its new James Bond collection.

The one-of-a-kind piece features an engraving of an Aston Martin DB5 with its famous BMT 216A number plate, surrounded by a gun barrel.

Measuring 185mm in diameter, it is the largest coin with the highest face value ever produced by the Royal Mint in its 1,100-year history.

The piece, which was created using engraving machines before being hand-polished, is part of a commemorative coin and gold bar collection launched ahead of the 25th James Bond film, No Time To Die.

It includes a smaller two-kilo gold coin with a denomination of £2,000, which has a recommended retail price of £129,990.

The world's first James Bond precious metal bars, which are available in gold and silver, are also included in the new collection.

They feature all 25 Bond film titles and will be available to purchase from mid-March.

Laura Clancy, who designed the seven-kilo coin, said: "When the opportunity to design a Bond coin came along, I had to take on the challenge. I've found it an incredible privilege – my career high to date and my most successful project."

As well as the larger coins, the Bond collection also features three additional designs in gold and silver which, when placed together, reveal the famous 007 motif.

The first coin from the series has the profile of the classic Bond car, the Aston Martin DB5.

Visit the stunning chateau Vaux le Vicomte, 35 miles south of Paris, to see its grandeur, baroque style and well-kept gardens. In 1979 Bond film Moonraker the chateau and its grounds were used as the home of main villain Hugo Drax.

Several scenes for Casino Royale were shot at the luxury One&Only Ocean Club in the Bahamas. It is where Bond arrives with a water plane and drives his Ford Mondeo to the club before causing car damage in the car park. He also plays a game of poker against Alex Dimitrios in the Library, off the lobby, and seduces Dimitrios' girlfriend Solange in his sea-view villa.

It was mentioned in Moonraker and Goldeneye, but Buckingham Palace's appearance in the Die Another Day is probably the most famous, when Sir Gustav Graves made a showy entrance by jumping out of a plane and landing by parachute in front of the palace. We love that it was used in the London 2012 opening ceremony too, with Bond walking along a Buckingham Palace corridor with the Queen.

In 2012's Skyfall, Bond heads to Scotland where a chase sequence is filmed in the Highlands on the A82, near the striking Buachailie Etive Mor. The secret agent’s iconic Aston Martin DB5 even manages to get upstaged by the stunning scenery. Visiting the area? Don't miss a trek to the majestic mountain, which is one of Scotland's most photographed attractions.

In the latest Bond film Skyfall, Turkey's largest city Istanbul was used as a major shooting location with opening scenes shot in Sultanahmet Square, the Grand Bazaar and Spice Bazaar, as well as the Hagia Sofia. Plus it's where a rooftop motorcycle chase takes place, which ends with Bond being shot.

1983 Bond film Octopussy featured luxury hotel Taj Lake Palace in Udaipur as Octopussy's floating palace. After a visit to the Taj Mahal, 007 visits the palace in Lake Pichola where its interior and exterior were used for shooting. Jag Mandir and Monsoon Palace were other places in Udaipur that appeared in the film.

Five-star Bedfordshire hotel Luton Hoo featured in 1999 film The World Is Not Enough when the Grinling Gibbons Room became the lair for Bond's ally Valentin Dmitrovich Zukovsky. It was the location for his famous quote, 'can’t you just say a hello, like a normal person?' The hotel was also a setting for 1983 film Never Say Never Again when the Capability Brown Private Dining Room on the lower ground floor was a hospital where a fight scene with Bond took place in the then-white tiled corridor.

Venice is incredibly busy with tourists so it can be difficult to find an authentic neighbourhood experience. But head to the energetic Cannaregio district in the north of the city and you will find a wonderful choice of osterias on the edge of the Ormesini canal.  At Al Timon bar and restaurant, popular with the city's young crowd, you can enjoy Venetian vino with a serving of Cicchetti - bar snacks of hard-boiled eggs, olives and small sandwiches. Cannaregio, Fondamenta degli Ormesini 2754

The breathtaking Meteora is a large complex of Eastern Orthodox monasteries built on natural sandstone pillars in central Greece. The UNESCO World Heritage site appeared in the final scene of 1981 film For Your Eyes Only when monastery Agia Triada was used as villain Kristatos' hideout.

Beautiful Himeji Castle is one of Japan's best-preserved castles dating back to 1333 and was added to the UNESCO World Heritage list in 1993. The attraction in Hyogo featured in the 1967 Bond film You Only Live Twice as Tanaka's ninja training camp.

The two remaining coins feature the submarine car from The Spy Who Loved Me and James Bond's iconic jacket and bow tie.

The cheapest coin from the collection, which has a face value of £5 and is made from cupronickel, has a retail price of £13.

No Time To Die, which features Daniel Craig in his final outing as the secret agent, will be in cinemas in the UK from April 2 this year.