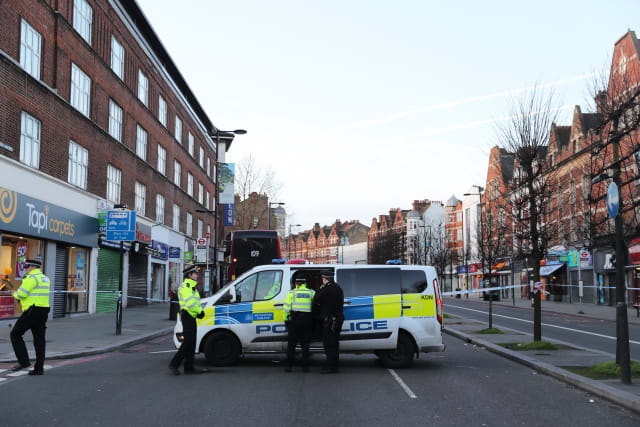 Two police officers called to the aftermath of the Streatham terror attack are under investigation for alleged dangerous driving and misconduct over a car crash.

The pair were travelling in convoy to the scene in south London on February 2 after extremist Sudesh Amman, wearing a fake suicide vest, stabbed two bystanders.

One of the officers, who was driving an unmarked police car, was involved in a crash with two other cars which left him and a member of the public with injuries.

His colleague, who was in a marked armed response vehicle, carried on to the scene of the terror attack.

On Monday watchdog the Independent Office for Police Conduct said the pair were under investigation on suspicion of dangerous driving as well as alleged gross misconduct.

A spokesman said: “We are conducting an independent investigation into a road traffic incident involving a Metropolitan Police car which collided with two vehicles while responding to the terror attack in Streatham on Sunday February 2. Two people received injuries.

“A criminal investigation does not mean that criminal charges will necessarily follow. Misconduct notices do not imply guilt but are to inform the officer that their behaviour and conduct are under investigation and the level of severity. Such notices are not judgmental in any way.”

The Metropolitan Police Federation, which represents more than 30,000 officers in the force from the rank of constable to chief inspector, called the move “a complete joke”.

Chairman Ken Marsh said: “The public will be appalled when they hear that brave police officers responding to a terrorist attack can be treated in such a manner.

“What kind of message does this send? These officers and their colleagues put their lives on the line that day to protect the public. Now potentially their careers are on the line. It’s absurd. A complete joke.

“Our colleagues did not know what danger they were travelling towards as the information emerged in real time about stabbings and threats of a suicide vest and explosives. Yet without hesitation they drove towards that danger. Because that’s what police officers do.

“And yet now their careers are at risk as the hindsight brigade decide to justify their existence. These people need to understand the split-second and dynamic decisions police officers have to take.”

The pair have been placed on restricted duties and are not allowed to drive police vehicles while the investigation is carried out.

Mr Marsh added: “No-one is saying that police officers should not be scrutinised or that their actions should not be accountable – but the last thing officers responding to a terrorist attack should be worrying about is whether their prompt response and bravery will put their livelihoods in danger.

“I am rarely astonished but this is truly astonishing.”

The investigation into the crash is separate to the inquiry into the fatal shooting by police of Amman.