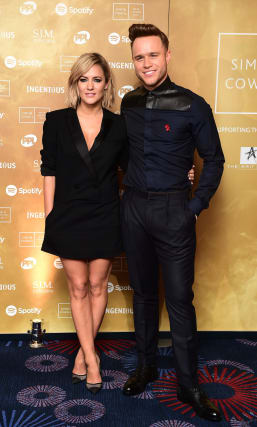 Olly Murs has recalled how he "broke down" after hearing news of Caroline Flack's death.

The singer worked alongside the former Love Island host for several years on The X Factor and its spin-off show The Xtra Factor.

He told The Sun he was "still in shock" after she was found dead at her home in east London last month, after taking her own life aged 40.

The Voice UK coach, 35, was on holiday with his bodybuilder girlfriend Amelia Tank when he received an early morning text alerting him to the news.

He said: "Even answering this question doesn't seem right, to be honest. I'm still in shock, really. To think I won't have a conversation, a laugh, work, or even just get a random voice note from Cazza again — I just can't get my head around it.

"I heard the news when I was away on holiday. My phone went at 2.23am and I'll never forget it.

"My manager told me and I just stared at my phone for hours, I didn't know what to do.

"I just didn't want to believe it. I was numb to any feelings and then I just broke down.

"Since then I just have constant waves of emotions — one minute I'm OK, the next I'm so sad for her. It's hard, I'll always miss Caz a lot."

Murs was on holiday recovering from knee surgery when he heard the news.

He highlighted the "truly awful" online abuse he had suffered while working alongside Flack on The Xtra Factor and X Factor between 2011 and 2015.

The Heart Skips A Beat singer said: "The worst I've ever had it was when me and Caz worked together presenting The X Factor. The online abuse from social media trolls was truly awful.

"I've never minded constructive criticism from my peers but with social media you get commented on — how you're doing your job, how you look, how you speak, and things people wouldn't dare say to your face.

"Eventually I stopped going on social media during the series, but something really does have to change online."

He said that everyone should be "accountable" for their actions on social media and suggested that the public, like many public figures, should be "verified" on platforms such as Twitter and Instagram.