Grenfell architect apologises to victims: It shouldn’t have happened 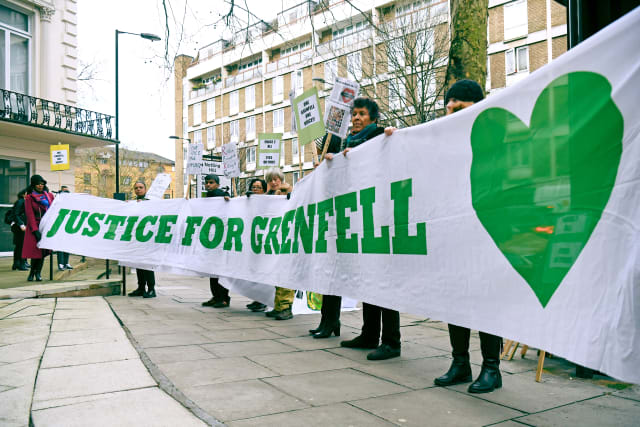 The director of the architecture firm behind the refurbishment of Grenfell Tower has apologised for the disastrous 2017 fire, telling the bereaved and survivors: “It really shouldn’t have happened.”

Andrzej Kuszell, from Studio E, told victims he was “really, really sorry” when he gave evidence to the Grenfell Tower Inquiry on Monday.

At the end of his questioning, Mr Kuszell said: “Hindsight now comes into play – we’ve lived two-and-a-half years since the tragedy and doubtless absolutely every one of us would wish to turn the clock back.

“I have to say that if we had understood that building regulations were not robust… this is so sad to say but I don’t think this tragedy would have happened, and it really cracks me up, because it shouldn’t have happened.

“It really shouldn’t have happened, and I’m really, really sorry for all of you and everybody else who was involved in the project.”

The 2017 blaze at the north Kensington block killed 72 people.

Mr Kuszell earlier told the hearings that the managing architect on the 24-storey tower’s refurbishment, Bruce Sounes, had no experience of overcladding residential blocks.

Richard Millett QC, lead lawyer for the inquiry, questioned Mr Kuszell on the selection of the team for the project, and asked: “You told us he (Mr Sounes) said he didn’t have any experience of overcladding an occupied residential high-rise building,” to which Mr Kuszell said: “Correct.”

Studio E was involved in the regeneration of neighbouring Kensington Academy and Leisure Centre (KALC), and later Grenfell Tower itself.

The inquiry also heard that the firm “got a bit of stick” for another design on the KALC project when “somebody made a comment that Studio E aren’t exactly residential architects”.

However, Mr Kuszell said he had faith his firm could complete the Grenfell job.

He said: “I believed we had the processes and experience of complex buildings to be able to undertake this commission. It wasn’t just my belief, it was clearly the belief of all senior members.”

He added: “We put the project in the hands of one of our most senior and experienced people… I had no reason to believe we wouldn’t be able to do it.”

Mr Kuszell’s evidence was slightly delayed on Monday, after the hearing had to be adjourned when it was interrupted by protesters.

As the hearing resumed around 10 minutes later, another man in the room addressed Sir Martin and said: “These people are not bereaved and survivors.”

Several people were escorted from the hearing room during the break.

The angry scenes came on the first day of the hearing after a month’s delay, during which Attorney General Suella Braverman guaranteed anything said by witnesses will not be used to prosecute them.

The Attorney General’s pledge stops oral evidence given by individual witnesses being used against them in any criminal prosecutions over the fire.

It does not cover any documents submitted to the inquiry, and does not stop witness evidence being used against corporations in future prosecutions.

Speaking after the interruption, Sir Martin said: “I was slightly surprised because, during the phase one hearings I was very impressed by the way in which everyone listened to the witnesses in a respectful and dignified way.

“Obviously, you may hear things that you don’t like to hear and people may feel strongly about some of the evidence, but it’s very important… that the witnesses are allowed to give their evidence with dignity and respect from everyone.”