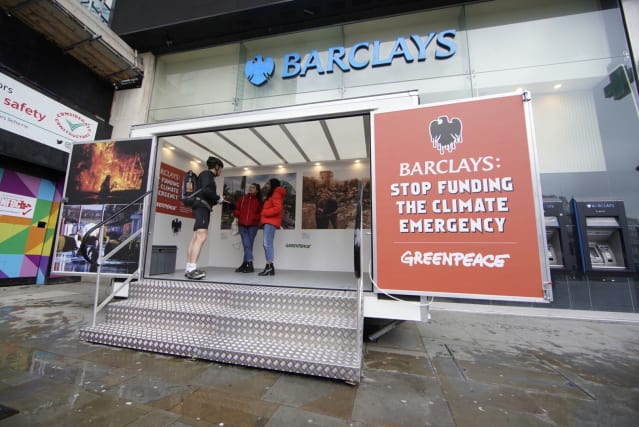 Greenpeace has targeted Barclays high street branches across the country over the bank’s support for fossil fuels.

The environmental campaigners said they had shut down almost 100 branches from Portsmouth to Dundee early on Monday morning by disabling doors to prevent staff from entering.

Greenpeace is demanding that Barclays stops its support for oil, gas and coal companies and channels funding into renewable energy instead to help tackle the climate crisis.

Outside the Castle Place branch in Belfast, Richard George, head of oil for Greenpeace, told the PA news agency: “Barclays is the biggest funder for the fossil fuel industry for the whole of Europe and the UK.

“We’re here to send a message that they need to move their money out of fossil fuels and start supporting real climate change solutions instead.”

He said the fight is not with customers, but with the bank, and that the environmental group was trying to minimise the inconvenience to the public who wanted to carry out their banking.

“From floods to bushfires and record heat in Antarctica, the impacts of this crisis are staring us in the face.”

He added: “Banks are just as responsible for the climate emergency as the fossil fuel companies they fund, yet they’ve escaped scrutiny for years.

“We’ve shut down branches across the country to shine a spotlight on Barclays’ role in bankrolling this emergency.

“It’s time Barclays pulled the plug and backed away from funding fossil fuels for good.”

A Barclays spokeswoman said: “We recognise that climate change is one of the greatest challenges facing the world today and are determined to do all we can to support the transition to a low carbon economy, while also ensuring that global energy needs continue to be met.”