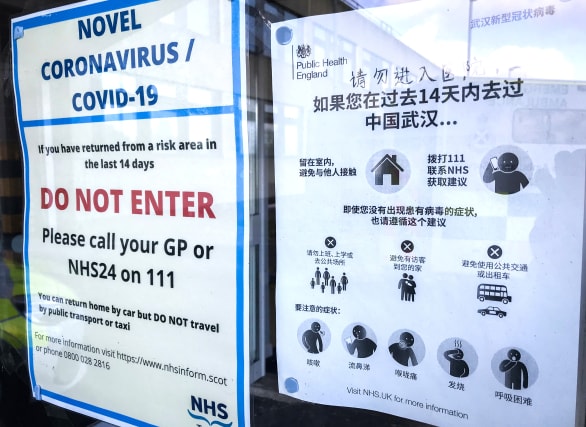 The total number of confirmed coronavirus cases in the UK increased to 40 on Monday after four new patients were diagnosed in England.

Chief medical officer for England Professor Chris Whitty says a fourth person has been diagnosed in the UK, who is believed to be a contact of Mr Walsh.

The Department of Health and Social Care (DHSC) says the four newly diagnosed people had contracted the virus in France.

The number of confirmed UK cases jumps to 20 after Wales reports its first patient and three more are identified in England.

Chief medical officer for Wales Dr Frank Atherton confirmed a man had been diagnosed with the virus after travelling back to Wales from Italy.

Two of the new cases identified in England had recently travelled back from Iran, Prof Whitty says.

The UK total climbs to 36 after 12 new patients are identified in England and Scotland reports its first case.

Three of the latest cases in England are family members of a man from Surrey who was the first to catch the illness within the UK.

All four are adults, including one more from Surrey and two from West Sussex, and are not GPs or health workers, the acting regional director for the south of England for PHE says.

Another new patient, from Essex, had no relevant travel to an affected area, according to Prof Whitty, and it was unclear whether the patient had contracted it “directly or indirectly” from somebody who had recently travelled abroad.

The eight remaining cases include one from Bury, Greater Manchester, who was infected in Italy, two new patients from Hertfordshire and one in London.

Another is from Gloucestershire and is linked to a member of staff at a school in the Cotswolds, identified the day before.

Meanwhile, the first person in Scotland to be diagnosed is a Tayside resident who recently travelled from Italy – the worst-affected country in Europe.

All four had recently travelled from Italy and were from Hertfordshire, Devon and Kent.