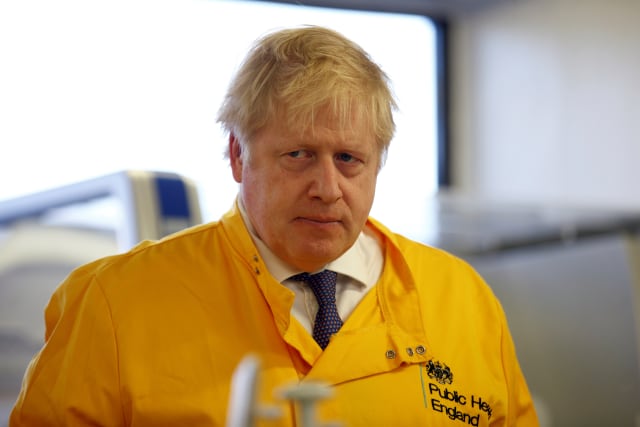 Boris Johnson has warned that the spread of coronavirus is likely to become more significant across the UK as the number of people infected climbed to 40.

Four new cases – among people from Hertfordshire, south Devon and Kent – were announced on Monday. All had travelled recently to Italy, which is experiencing the biggest outbreak in Europe.

The Prime Minister warned earlier that more cases in the UK are likely as he urged people to wash their hands to the tune of Happy Birthday.

Speaking after an emergency Cobra meeting where ministers discussed a “battle plan” to be published on Tuesday, Mr Johnson said the spread of Covid-19 was likely to become “more significant” for the UK in coming days.

He said: “We have also agreed a plan so that if and when it starts to spread, as I’m afraid it looks likely it will, we are in a position to take the steps necessary to contain the spread of the disease as far as we can, and to protect the most vulnerable.”

The PM said decisions to close schools and ban mass gatherings would only be taken on scientific advice, adding: “The most important thing for people to understand is that (measures) will be guided by scientific advice.

“All four nations of the UK and the chief medical officers are involved in this and they will be helping us to take key decisions on when and how to take protective steps.

“We cannot forget that the single most useful thing that we can all do to support the NHS is to wash our hands, two times to Happy Birthday, with hot water.

“It’s very important that people should continue (doing) that and they should go about business as usual.”

Government sources told the PA news agency it could be “months rather than weeks” before the outbreak peaks in the UK.

In a suggestion that extra emergency powers would not be required immediately, the source said: “We don’t want to have to take decisions before we have to. As much as possible we want people to carry on with their daily lives.”

Legislation allowing the Government to use extra powers to help control the virus is expected to go through Parliament by the end of the month.

Measures could include asking retired doctors and nurses to return to the NHS, urging people to work from home, closing schools, increasing class sizes and cancelling large public events.

Professor Paul Cosford, emeritus medical director of Public Health England (PHE), warned that widespread transmission of coronavirus in the UK has become much more likely as not all cases could be traced to overseas.

Asked on BBC Breakfast if widespread infection was inevitable, Prof Cosford said: “I wouldn’t say anything is inevitable, but it is now highly likely.”

He said this could happen “in the next few days or it could take a little longer”.

While most people would only suffer mild infection, with children and healthy adults seeming to be at much lower risk of serious complications, experts would worry most about the elderly and those with an underlying illness, he said.

In a piece for the Evening Standard on Monday, Health Secretary Matt Hancock said the Government was still working on containment of the virus in the UK, where people are identified and their close contacts traced.

“But we are realistic about the fact that globally cases are rising and we may not be able to rely on it forever, especially if coronavirus becomes more widespread in Europe,” he added.

“The next phase is delay. We will move to this phase if the global situation makes containing the virus impossible.”

He said delay is “about slowing the spread, lowering the peak impact and pushing it away from the winter season when the NHS is under maximum pressure”.

He said people should wash their hands and self-isolate at home if they are told to do so, and he did not want to use Government powers to compel people to do so.

He added: “We may need to take further measures to delay the spread of coronavirus, including actions that have already been taken by other European countries at more advanced stages of an outbreak. All options are on the table.

“And while protecting the public is our first priority, as far as reasonably possible we want to minimise the social and economic costs that some options entail.

“It will not help the situation — nor the NHS — if we cause widespread social or economic disruption by going too far too fast. Our actions will always be guided by expert scientific advice: planning for the worst and working for the best.”

Mr Hancock said that if coronavirus becomes established in the UK population, “we will only be able to delay for so long”.

The next mitigation phase would be about “providing the best possible care for those who fall sick, with the best use of resources in the hospital system which will come under major pressure”.

“Our focus will also be on maintaining essential services at a time when large parts of the workforce may be off sick.”

Earlier, the European Commission raised the coronavirus risk level from moderate to high for those in the European Union and the UK.

One of the cases diagnosed on Monday was a worker at the North East London NHS Foundation Trust offices at Vinters Business Park near Maidstone in Kent.

Some 13 new patients in the UK were diagnosed on Sunday, including a member of staff at Wimbledon College and a clinician at Mount Vernon Cancer Centre in Northwood, Middlesex, which is part of East and North Hertfordshire NHS Trust.

Three of the new cases in England were linked to a man from Surrey, who was infected within the UK.