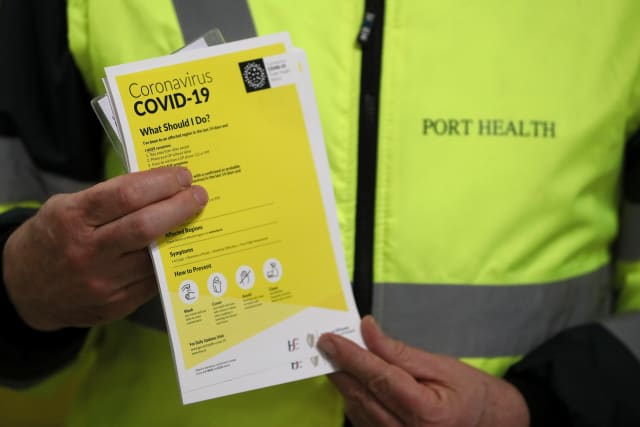 The spread of coronavirus in the UK is likely to become more significant, the Prime Minister has warned, as he urged people to wash their hands to the tune of Happy Birthday.

Speaking after an emergency Cobra meeting where ministers gathered to discuss a “battle plan” to be published on Tuesday, Boris Johnson said the spread of the coronavirus was “likely” to become “more significant” for the UK in the coming days.

He said: “We have also agreed a plan so that if and when it starts to spread, as I’m afraid it looks likely it will, we are in a position to take the steps necessary to contain the spread of the disease as far as we can, and to protect the most vulnerable.”

He said closing schools and banning mass gatherings would only be taken upon scientific advice, adding: “The most important thing for people to understand is that (measures) will be guided by scientific advice.

“All four nations of the UK and the chief medical officers are involved in this and they will be helping us to take key decisions on when and how to take protective steps.

“We cannot forget that the single most useful thing that we can all do to support the NHS is to wash our hands, two times to Happy Birthday with hot water.

“It’s very important that people should continue (doing) that and they should go about business as usual.”

Earlier, Professor Paul Cosford, emeritus medical director of Public Health England (PHE), warned that widespread transmission of coronavirus in the UK has become much more likely as not all cases could be traced to overseas.

Asked on BBC Breakfast if widespread infection was inevitable, Prof Cosford said: “I wouldn’t say anything is inevitable but it is now highly likely.”

Going on to speak on ITV’s Good Morning Britain, Prof Cosford explained that “the extent of infection we are seeing in other countries suggests it is likely that we will see more widespread infection in the UK”.

He said: “We should expect at times that might be quite challenging for us, it is therefore very important that we do everything we can to reduce the spread of infection.

“At the moment, the vast majority of cases we see in the UK are still linked to countries where there is more widespread infection, either in Italy or South East Asia.

“It is true to say there is a small number now where it is much more difficult to find that link, and that is leading us to think we may well see more widespread infection in the UK fairly soon.

“It could happen in the next few days or it could take a little longer.”

Prof Cosford said most people would only suffer mild infection, and that children and healthy adults seem to be at much lower risk of serious complications, while experts would worry most about the elderly and those with underlying illness.

Meanwhile, European Commission president Ursula von der Leyen said on Monday the EU had raised its coronavirus risk level from “moderate” to “high” for those in the European Union.

First Minister Nicola Sturgeon also took part after a Tayside resident – who had recently travelled from Italy – was diagnosed with the virus.

Shadow health secretary Jonathan Ashworth has said Labour would support putting cities in lockdown if the medical advice showed it was necessary.

Meanwhile, Richard Ratcliffe, whose wife Nazanin Zaghari-Ratcliffe is jailed in Iran, said she is showing “all the symptoms” of coronavirus but is still yet to be tested.

Of the new UK cases reported over the weekend – taking the total to 36 – three are family members of a man from Surrey who tested positive on Friday.

He is one of a handful of cases with no recent travel to affected countries, raising fears the virus is being passed on more easily in the UK.

One of the three cases linked to the man is from Surrey, while a further two are from West Sussex.

Another new patient, from Essex, had also not recently travelled to an infected area.

One other case is a person from Bury, Greater Manchester, who was infected in Italy.

Two new patients are from Hertfordshire.

One patient is a clinician at the Mount Vernon Cancer Centre in Northwood, Middlesex, which is part of East and North Hertfordshire NHS Trust.

And one other case is from London.

Wimbledon College announced on Monday it will close until March 10 and undergo a deep clean after a member of staff tested positive for coronavirus following travel to Italy.

Another new case other is from Gloucestershire and linked to a member of staff at St Mary’s Primary School, Tetbury, who was identified on Saturday.

Both patients became infected while in northern Italy.

Meanwhile, a staff member at Willow Bank Infant School in Reading, Berkshire, was confirmed to have tested positive on Saturday.

In Tenerife, dozens of Britons who have been confined to the Costa Adeje Palace hotel are preparing to fly home where they will self-isolate for 14 days.

Globally, the number of people killed worldwide by the virus exceeds 3,000 and there have been almost 90,000 confirmed cases.

In Italy, which has the most cases in Europe, there are 1,694 confirmed cases and 34 deaths.

A Chinese woman diagnosed with coronavirus in the UK after going to Lewisham hospital in London in a Uber has been discharged from Guy’s and St Thomas’ NHS Foundation Trust after recovering.