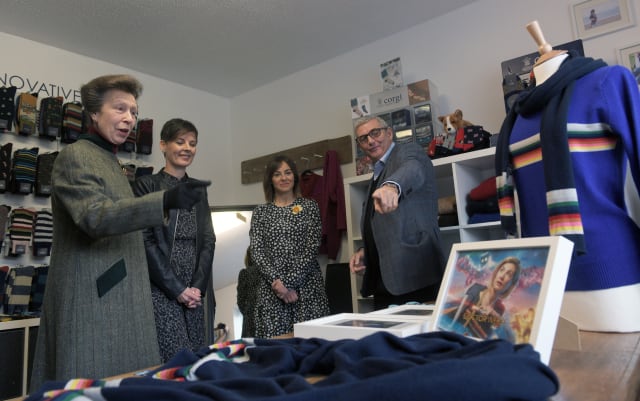 The Princess Royal was presented with a replica Doctor Who scarf as the knitwear worn by the 13th Doctor Jodie Whittaker was made available to buy for the first time.

Anne toured luxury brand Corgi in Ammanford, Wales, on Monday as the firm launched its new Doctor Who range in association with BBC Studios.

The princess was introduced to costume designer Ray Holman who came up with the idea for the current Time Lord’s outfit – which includes a blue jumper with a band of horizontal multi-coloured strips.

Other items include knitted blue and turquoise socks, ranging from £19 to £39.

Mr Holman said: “As a small company in the heart of Wales, the craft of knitting is still very much alive and we were able to use these skills in the creation of the jumpers, socks and scarves for this range.”

She said: “I really love the use of colour on Coldplay album covers, which I also showed to Ray Holman.

“Which is where the rainbow came in – nothing evokes a sense of hope in me more than hundreds of rainbows.”

Anne is president of the UK Fashion and Textile Association. Family-run firm Corgi was established in 1892.

It was awarded a Royal Warrant by the Prince of Wales in 1988, and supplies the royal family with knitted goods.