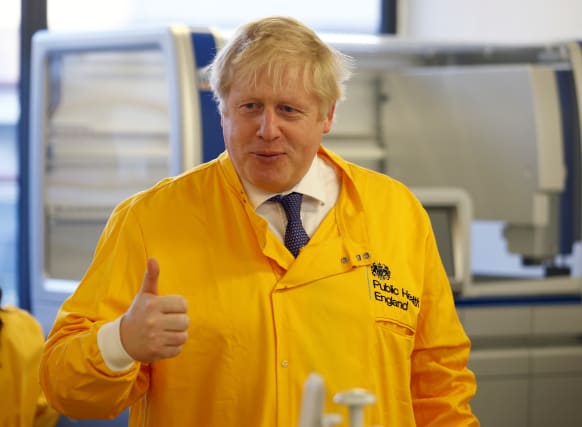 The Prime Minister has confirmed he "absolutely" has full confidence in Home Secretary Priti Patel after her most senior adviser quit and levelled bullying accusations against her.

There had been calls for Ms Patel to resign as Secretary of State following the explosive resignation of the Home Office's top civil servant on Saturday.

But Boris Johnson told reporters during a visit to Public Health England in North London: "I absolutely do have confidence in Priti Patel.
"I think she is a fantastic Home Secretary.

"It is never an easy job, as anyone who has been Home Secretary will testify. It is one of the toughest jobs in Government."

The Conservative Party leader was also sure to praise the work of the civil service after Sir Philip's walkout sent shock waves through Westminster and Whitehall.

The Home Office permanent secretary accused Ms Patel of orchestrating a "vicious" campaign against him, of lying about her involvement in it and of creating a climate of fear among her officials.

Speaking to the BBC, Sir Philip said "tension" developed in his relationship with the Home Secretary after he challenged her over her behaviour, which he said staff claimed included "shouting and swearing, belittling people (and) making unreasonable demands".

Mr Johnson said he was "full of admiration" for the civil service, which he said ministers "depend on" to implement changes.

"I want to make one thing absolutely clear – I am full of admiration for our civil service and the job that they do," the PM added.

"We politicians could not begin to accomplish things without the fantastic, absolutely brilliant alpha minds in the civil service. We depend on them."

Sir Philip's resignation was followed by almost 24 hours where no minister spoke out in defence of the embattled former international development secretary.

The silence fuelled rumours that Ms Patel would be forced to resign, but the PM's backing means she is likely to survive the latest Home Office crisis.

Health Secretary Matt Hancock had earlier defended his Cabinet colleague as being "extremely courteous" in her dealings with colleagues.

And Conservative ally Nusrat Ghani MP, who was sacked as a minister by Mr Johnson last month, said the criticism of Ms Patel had sexist overtones.

"I also think she is extremely courteous, and in every dealing I've had with her she has been very courteous."

Asked on BBC Radio 5 Live whether he was accusing Sir Philip of lying, Mr Hancock added: "I'm not getting into that."

Former transport minister Ms Ghani told Sky News: "I do think it's curious that if you're providing leadership, if you're determined, working at a fantastic pace, that within men that is seen as a fantastic skill and for women sometimes it's seen as challenging."

Labour had looked to ramp up the pressure on the under-fire Home Secretary, with shadow chancellor John McDonnell suggesting she could be forced to resign.

And party leadership candidate Sir Keir Starmer also called on Ms Patel to explain to MPs the explosive allegations levelled against her by Sir Philip.

Sir Keir said: "The Home Secretary has a duty to come to Parliament on Monday to explain the allegations made about her own conduct."

In his statement on Saturday, Sir Philip said the campaign against him included "false" claims that he had briefed the media against the Home Secretary.

"I believe these events give me very strong grounds to claim constructive, unfair dismissal and I will be pursuing that claim in the courts."

Cabinet Secretary Sir Mark issued a brief statement about two hours after Sir Philip quit, saying he had accepted his resignation "with great regret", and adding: "I thank him for his long and dedicated career of public service".