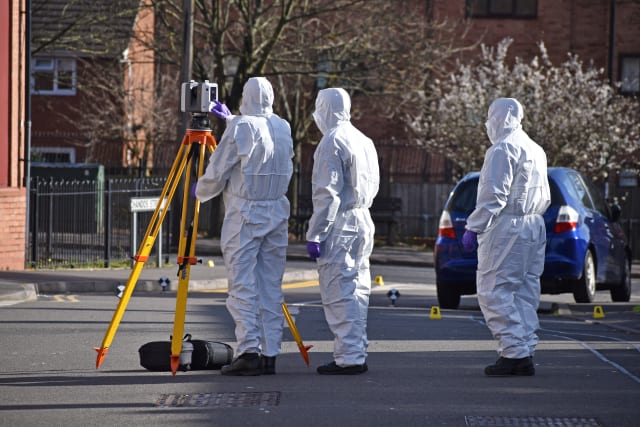 A 16-year-old boy who was stabbed to death in the street after a row broke out at a house party has been named by police.

Ramani Morgan, from Erdington, Birmingham, was pronounced dead despite efforts to save him by police, paramedics and hospital staff, after he was found injured in the Stoke area of Coventry.

West Midlands Police have arrested two teenage boys, both aged 17 and from Coventry, on suspicion of murder.

Specialist forensic search teams could be seen on Sunday lifting drain covers in Chandos Street, where the party took place, and in nearby Clay Lane, where Ramani was found by a member of the public at about 10.30pm on Saturday.

Commenting on the killing, Detective Inspector Michelle Allen, of the West Midlands Police homicide team, said: “This is simply tragic. My thoughts remain with the young man’s family and friends at this heart-breaking time.

“They are being supported by our specially trained family liaison officers.

“I’m still keen to hear from anyone who was at the party or anyone who has any information about what has happened last night to get in touch as soon as possible.

“If anyone was driving through the area last night and has dash-cam footage then I’d also ask them to get in contact. A young boy has died and we need to understand exactly what happened.”

Speaking to the media at West Midlands Police headquarters in Birmingham, Chief Superintendent Mike O’Hara, the policing commander for Coventry, said: “At half past 10 we got a call to say that a young man had been found collapsed in Clay Lane.

“It seems what’s happened is there has been quite a large house party in Chandos Street, in the Stoke area.

“We have then had an altercation between some young people at the party and that has spilled out on to the street, and as a direct result a young man called Ramani Morgan, who is 16, was stabbed several times.

“Unfortunately the paramedics and the police weren’t able to save him and he passed away last night.”

Appealing for witnesses, including anyone with phone or dashcam footcam, to come forward, the senior officer added: “Anyone who was in the Chandos Street or Clay Lane area of Coventry last night, we would be really keen to speak to them, whether they were in vehicles or on foot.”

Anyone with information can contact police on 101, message the West Midlands force’s Live Chat service via its website, or pass information anonymously to Crimestoppers on 0800 555 111.