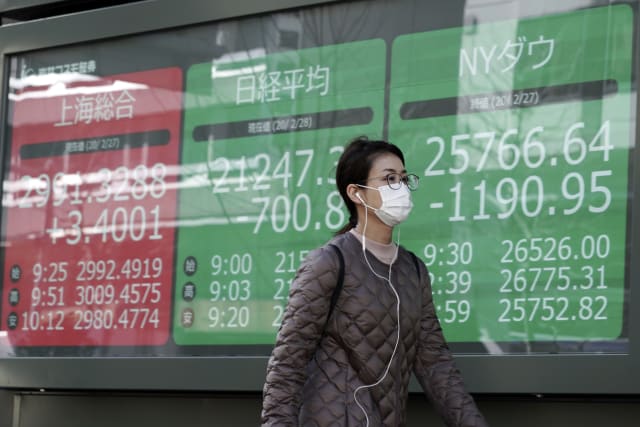 Stocks have been volatile as investors fret the coronavirus outbreak will derail the global economy but in those declines some see opportunities to buy.

The benchmark for the smaller exchange, in Shenzhen, jumped 3.4%.

“It may well be a case of news being not as bad as it could have been,” Jeffrey Halley of Oanda said.

“Today’s rallies across Asia have a definite relief rally look to them. Measured against the scale of last week’s sell-offs, the bounces this morning are small.”

Stocks sank on Wall Street on Friday, extending a rout that left the market with its worst week since October 2008.

The damage from the week of relentless selling was eye-popping: The Dow Jones Industrial Average fell 3,583 points, or 12.4%.

Microsoft and Apple, the two most valuable companies in the S&P 500, lost a combined 300 billion dollars (£235 billion).

In a sign of the severity of the concern about the possible economic blow, the price of oil sank 16%.