Britain pulls diplomats out of Iran amid Zaghari-Ratcliffe coronavirus fear 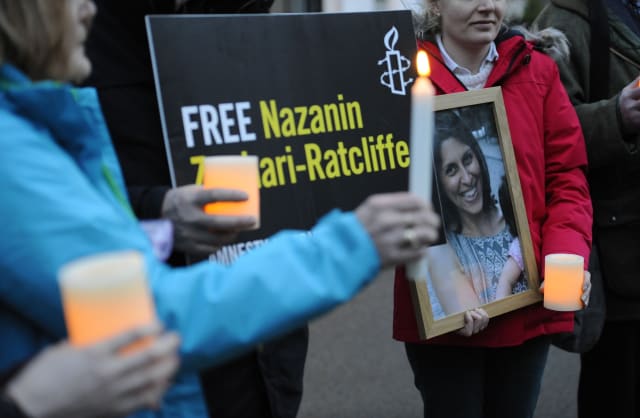 Britain is pulling all non-essential staff out of its embassy in Tehran due to increasing concerns about the spread of coronavirus in Iran.

Iran’s health ministry announced on Sunday that the death toll from the global virus now stood at 54, while the number of people infected had soared to 978.

The Foreign Office has confirmed that staff and their dependants will be brought back to the UK as a result of the growing outbreak.

The move comes after Richard Ratcliffe said he suspected that his wife Nazanin Zaghari-Ratcliffe, who is imprisoned in Iran, had contracted coronavirus.

The father-of-one has expressed concern at the prison’s “refusal to test her”.

In updated travel advice for Iran, the Foreign Office said: “As of March 1, dependants and some staff from the British Embassy are being withdrawn from Iran due to the ongoing coronavirus (Covid-19) outbreak.

“In the event that the situation deteriorates further, the ability of the British Embassy to provide assistance to British nationals from within Iran may be limited.”

Mr Ratcliffe said he has repeatedly asked for his British-Iranian wife to be tested for the virus at the Evin prison in Tehran, following a “strange cold” that has not improved in more than five days.

The Foreign and Commonwealth Office (FCO) has called on the Iranian government to “immediately allow” health professionals into the prison to assess British-Iranian dual nationals.

Although there are currently no confirmed cases at the prison, Covid-19 has spread rapidly across Iran, with more than 50 people dying after contracting the illness.

In an update over the weekend, issued through the Free Nazanin Campaign, Mr Ratcliffe said his wife had seen “no improvement” and was suffering with a continual cold sweat and a feeling of nausea.

In a phone call with her family, Mrs Zaghari-Ratcliffe said: “For a long time this has not felt like a normal cold.

“These symptoms have lasted almost a week. I know I need to get medicine to get better. This does not go magically.”

Mr Ratcliffe said his wife had informed the prison guards of her symptoms and that she suspected she could be suffering from coronavirus, but she is yet to be tested.

Following reports of conditions at the prison on Friday, he said a new batch of disinfectants, gloves and masks were made available to the ward.

He added: “We further call on the Prime Minister to take charge as part of his coronavirus efforts to ensure that British Iranians held hostage in Evin prison are diplomatically protected.”