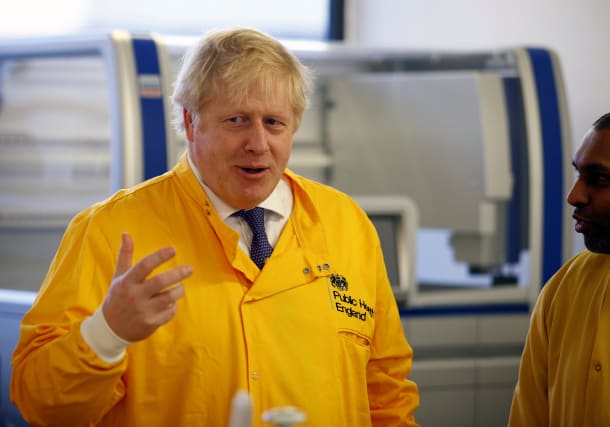 The Prime Minister is to chair an emergency Cobra meeting on coronavirus following a weekend which saw the number of people infected in the UK climb to 36.

Boris Johnson is expected to warn ministers that Covid-19 will present a “significant challenge” to the country as he finalises a new battle plan by the Government.

Scotland declared its first case, while 12 new patients were diagnosed in England on Sunday, when the Health Secretary admitted it was “inevitable” coronavirus would continue to spread.

Matt Hancock would not rule out following China’s lead in shutting down cities if the Covid-19 outbreak escalates.

Mr Johnson, who has faced criticism for waiting until Monday to chair a meeting on the deadly virus, is due to lay out contingency plans which could include banning public gatherings.

“The number of coronavirus cases around the world is rising every day – and the UK is no exception,” he is set to tell the meeting.

“There now seems little doubt that it will present a significant challenge for our country.

“But we are well prepared, and the Government and the NHS will stop at nothing to fight this virus.”

It will be attended by senior ministers as well as chief medical officer Professor Chris Whitty and chief scientific adviser Sir Patrick Vallance, as they ratify the Government’s proposed countermeasures.

First Minister Nicola Sturgeon is also expected to take part after a Tayside resident – who had recently travelled from Italy – was diagnosed with the virus.

Three of the latest cases are family members of a man from Surrey who tested positive on Friday. He had no recent travel history and is the first person to contract Covid-19 within the UK.

All four are adults, including one more from Surrey and two from West Sussex.

Prof Whitty said another new patient, from Essex, had not recently travelled to an infected area.

He added investigations were ongoing as to whether the patient had contracted it “directly or indirectly” from someone who had recently travelled abroad.

Another case is a person from Bury, Greater Manchester, who was infected in Italy and has now been taken to a specialist NHS infection centre.

Two of the new patients are from Hertfordshire, including a clinician at the Mount Vernon Cancer Centre, which is part of East and North Hertfordshire NHS Trust.

A statement from the trust said: “All individuals who were in contact with the clinician have been identified and the appropriate measures taken.

“The risk to patients and staff at Mount Vernon Cancer Centre is very low and we are working with individual patients to appropriately manage their care.”

One other case is from London and the other is from Gloucestershire and linked to a member of staff at a Tetbury school in the Cotswolds, who was identified on Saturday.

“Staff from PHE have continued to support St Mary’s Primary School, Tetbury, where one of the cases works.”

In a letter to parents, headteacher Mrs Jo Woolley said that while it was not necessary to close the school from a health perspective, it will close until at least Wednesday due to “operational difficulties” with staff members.

A staff member at an infant school in Berkshire was confirmed to have tested positive on Saturday.

On Sunday, the Department of Health and Social Care announced every department will have a ministerial lead on the virus, and a cross-Whitehall “war room” is being set up to roll out an enhanced public information campaign.

Emergency powers designed to restrict Covid-19 if it becomes endemic, due to be announced this week, would only be “temporary”, said Mr Hancock.

He confirmed that “population distancing measures”, such as banning public gatherings and cancelling football matches, could be considered by the Government, while closing schools may be “necessary”.

The Foreign Office confirmed that non-essential staff, as well as dependants, are to be pulled out of the British Embassy in Tehran.

The Republic of Ireland reported its first case on Saturday, with a secondary school to be closed for 14 days after authorities identified its pupils and teachers as having been in contact with the male patient.

Globally, the number of people killed worldwide by the virus exceeds 3,000 and there have been almost 90,000 confirmed cases.

While most patients only have mild symptoms, Covid-19 appears to be much more deadly than seasonal flu.

In Italy, which has the most cases in Europe, the number of infections doubled in 48 hours over the weekend.