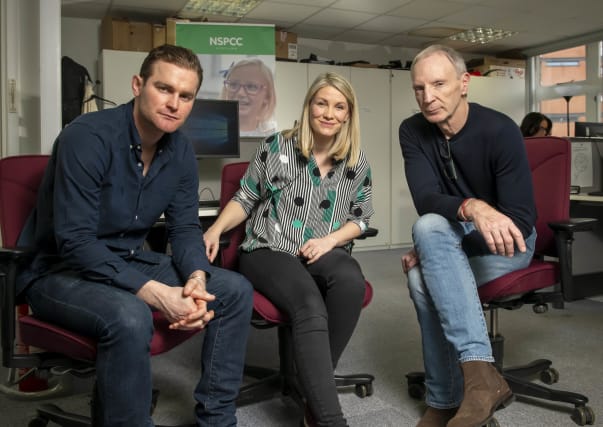 The stars and subject of a film about child sexual abuse have praised the work of Childline as they met counsellors at its offices in Glasgow.

Sulphur And White, based on the life of NSPCC ambassador and fundraiser David Tait, tells the story of the sexual abuse he suffered and the impact it had on his life.

Mr Tait and stars Mark Stanley – who was in Game Of Thrones – and Emily Beecham – who starred in Daphne – visited the Childline base in Glasgow on Saturday after the film was shown at the Glasgow Film Festival on Friday.

Mr Tait, whose wife Vanessa has volunteered as a Childline counsellor for many years, said: “I backed Sulphur And White being made because I wanted people to understand the reality of child sexual abuse and the collateral damage it can cause. I also wanted to show people that there is redemption and a future.

“I’m hoping the film will encourage people with hidden pasts to talk about their own problems and it will give them comfort.

“The NSPCC and Childline is such an incredibly important resource for children these days – that they can reach out for help and there is someone there to listen to them and support them.”

Stanley, who plays David on screen, said: “I hope that people watching Sulphur And White will gain some of the insight and understanding that I got from playing this part about the profound impact of child sexual abuse.

“I think the work that Childline counsellors do is invaluable – that children have somewhere to turn, where they will be listened to and not judged, at any time of day or night.”

The film is being released in cinemas on March 6, with 20% of ticket sales going to the children’s charity.

Matt Forde, national head of service for NSPCC Scotland, said: “We know that Childline is a lifeline for so many children and young people who have been sexually abused.

“Our counsellors are sometimes the first people they have ever told about it. And many of them talk about having mental health issues, which are often triggered by the trauma of the abuse they have experienced.

“It is so important that people feel that if they speak out they will be listened to and believed, however much time has passed since the abuse happened.

“We hope that David’s story will give people the courage to do so, and that they will receive the support they need.”

Since leaving his role as a city trader, Mr Tait has raised more than £1.5 million for the children’s charity by climbing Mount Everest five times.