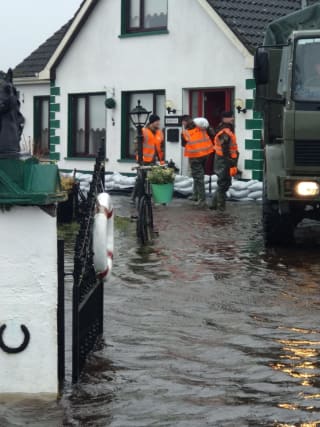 Strong winds and heavy downpours are battering the island of Ireland as Storm Jorge passes.

Thousands of homes were left without power on the west coast as the storm made landfall while fallen trees were causing traffic disruption across the Irish Republic.

About 15,000 properties were cut off during the earlier part of Saturday and by mid-afternoon ESB Networks had been successful in returning supply to all but 1,000 customers.

In the Maam Valley in County Galway, dramatic video footage captured the moment a lorry was blown on its side by the force of the winds.

The latest storm is adding to the woes of communities already dealing with severe flooding around the River Shannon.

A status red wind warning for counties Galway and Clare lifted at 3pm but an orange alert remains in place until midnight for those counties and Donegal, Leitrim, Mayo and Sligo, with gusts of up to 135kmph (83mph) forecast.

A yellow warning was in place for several other counties.

A yellow rain alert was also in place until midnight for Donegal and the whole of Connacht while the whole country was covered by a snow and ice warning until late afternoon on Saturday.

He urged people in the worst affected areas to stay indoors.

“There is a potential for damage from gusts everywhere in the country today,” he said.

In Northern Ireland, there was also traffic disruption.

The Met Office has issued a 24-hour yellow wind warning for the whole region, which will end at 12pm on Sunday.