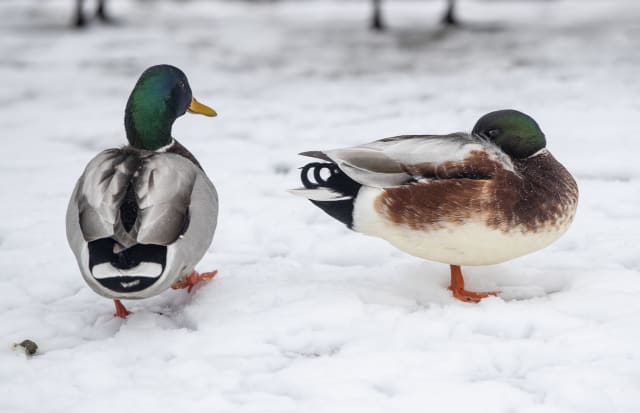 Cold, bright and frosty conditions are forecast for Sunday as the UK enters a new month following its wettest February on record, which saw three successive storms bring heavy downpours and flooding.

Thousands of homes and businesses were flooded as areas were deluged by more than a month's worth of rainfall in just 24 hours, while some 127,000 properties were protected by flood defences this winter, authorities said.

Some 15 rivers in the Midlands, Yorkshire and Lancashire recorded their highest levels on record and the Environment Agency warned the country needs to brace itself for "more frequent periods of extreme weather like this" because of climate change.

Strong winds of up to 70mph, showers and snow across parts of Scotland and northern England are forecast for Sunday morning, with many areas waking to a touch of frost and ice, the Met Office said.

Jorge, this month's third named storm, prompted weather warnings stretching from Cornwall to the north of Scotland and across to Northern Ireland.

Wind warnings last until 9am on Sunday across much of England and Wales and until 3pm the same day across Northern Ireland, southern Scotland, and northern England.

Persistent snowfall was forecast over higher parts of Scotland, with up to 30cm predicted in some places, with warnings in place until noon on Monday, the Met Office said.

The Government has said it is investing £2.6 billion in flood defences by 2021.

On Saturday, flooded roads were closed in Wiltshire, people were rescued from cars stranded in water in Devon and Somerset, and the Ouse Bridge in Humberside was closed to high-sided vehicles and the speed limit lowered to 40mph amid fears of strong winds.

Police in flood-hit South Wales declared a temporary "critical incident" on Saturday morning as emergency services, councils and other bodies worked to protect property and infrastructure and protect residents.

A total of 90 flood warnings were in place across England and Wales, mostly in the South West and along the English-Welsh border, and in Yorkshire, while a further 215 "flooding is possible" alerts are also in force.

Towns including Ironbridge and Bewdley along the River Severn in the West Midlands, and West Cowick and Lidgate in East Yorkshire, along the River Aire, are among the worst-hit areas in England.

More than 3,300 properties in England are thought to have been flooded as a result of the combined effects of storms Ciara and Dennis, the Department for Environment Food and Rural Affairs said.

On Tuesday, Welsh Government minister Lesley Griffiths said local authorities in Wales had confirmed more than 1,000 homes had flooded, with reports of more than 300 businesses also affected over the previous two weeks.

The leap year does not affect the wettest February record data, the Met Office said.