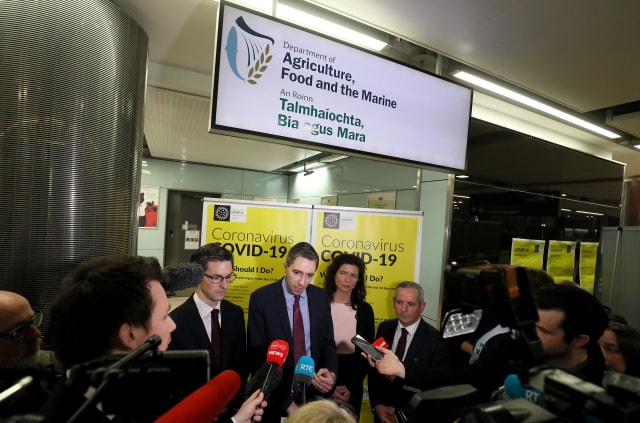 The first case of coronavirus has been confirmed in the Irish Republic.

The health authorities said the patient – a male in the east of the country – contracted the virus in one of the areas of northern Italy badly affected by the Covid-19 outbreak.

Health authorities are now trying to establish what contacts the patient had in Ireland since travelling from Italy.

Saturday night’s announcement comes 48 hours after the first case in Northern Ireland was made public.

Earlier on Saturday, Government ministers on both sides of the Irish border held talks on how to co-ordinate their response to the coronavirus spread.

Commenting after Ireland’s Health Protection Surveillance Centre was alerted to the case, Dr Holohan said: “This is not unexpected. We have been preparing for this eventuality for many weeks now.

“Public health protocols have been in place since January and are operating effectively.

“The health service is well used to managing infectious diseases and has robust response measures in place.”

Dr John Cuddihy, director of Ireland’s Health Protection Surveillance Centre, said: “The HSE (Health Service Executive) is now working rapidly to identify any contacts the patient may have had, to provide them with information and advice to prevent further spread.

“It is important to note that the risk of transmission through casual contact is low.”

Health Minister Simon Harris said preparations for an anticipated case in the country had been ongoing since January.

“I would strongly encourage people to follow the guidance and advice of the National Public Health Emergency Team, led by the Chief Medical Officer,” he said.

Mr Harris said anyone concerned that they may have symptoms of Covid-19 should immediately isolate themselves from others and contact their GP by phone.

The first case on the island involved a woman who travelled through Dublin Airport on her way home after flying with Aer Lingus from northern Italy with a child.

She was tested at the Royal Victoria Hospital in Belfast but is being treated in isolation at home.

On Saturday, the Public Health Agency (PHA) in Northern Ireland announced that secondary tests had confirmed the woman had the virus.

The case was initially announced as a “presumptive positive” on the basis of tests carried out in Northern Ireland. A sample was then sent to a Public Health England reference laboratory for confirmation.

Senior health officials from both jurisdictions were also involved in the discussions, which focused on north south co-operation on the issue.