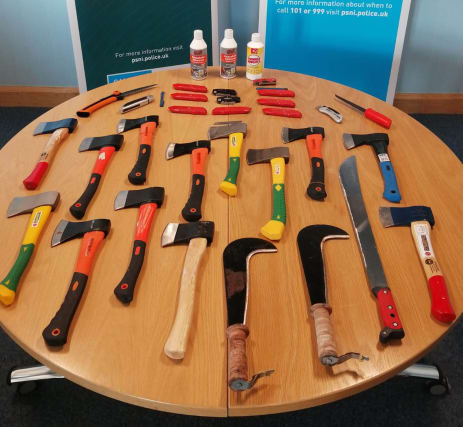 Three people have been charged in relation to a disturbance at a funeral that involved people armed with hatchets.

The three males, aged 17, 22 and 32, are charged with several offences including possessing an offensive weapon and possessing an article with blade or point in a public place.

They were arrested after scuffles broke out at the service at St Mary’s Church on the Melmount Road in Strabane, Co Tyrone on Thursday morning.

The incident is understood to have involved members of the Travelling community.

Police were swiftly on the scene when trouble broke out, having received intelligence that there was the potential for disorder at the funeral.

Officers seized a large haul of weapons, including machetes, hatchets and other bladed weapons.

It is understood some of the weapons were concealed on some of the people involved in the fracas, while others were stashed in vans parked outside the church.

Some of the chaotic scenes were broadcast on the church’s live webcam stream of the service.

Mourners were seen running for the exit amid screaming.