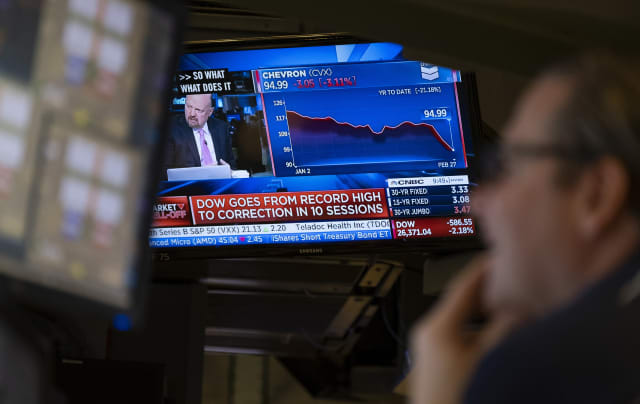 Global stock markets are plunging amid concerns over the coronavirus, with some suffering their worst week since the financial crisis of 2008.

Germany’s DAX fell as much as 5% before stabilising and Tokyo and Shanghai closed 3.7% lower.

Investors had been growing confident the disease that emerged in China in December might be under control. But outbreaks in Italy, South Korea, Japan and Iran have fuelled fears the virus is turning into a global threat that might derail trade and industry.

Anxiety intensified when the United States reported its first virus case in someone who had not travelled abroad or been in contact with anyone who had.

Markets in China and Hong Kong had been doing relatively well despite virus fears. Mainland markets were flooded with credit by authorities to shore up prices after trading resumed following an extended Lunar New Year holiday. Chinese investor sentiment has also been buoyed by promises of lower interest rates, tax breaks and other aid to help revive manufacturing and other industries.

Investors came into 2020 feeling confident the US Federal Reserve would keep interest rates at low levels and the US-China trade war posed less of a threat to company profits after the two sides signed a truce in January.

The market’s sharp drop this week partly reflects increasing fears among many economists that the US and global economies could take a bigger hit from the coronavirus than previously thought, weakening consumer confidence and depressing spending.

US bond prices soared as investors fled to safe investments. The yield on the benchmark 10-year Treasury note, or the difference between the market price and what an investor will be paid if the bond is held to maturity, fell to a record low of 1.16%.

A shrinking yield caused by investors shifting money into the relative safety of bonds and pushing up their market price is a sign of weakening confidence in the economy.

Boris Johnson ‘responding to treatment’ in intensive care with coronavirus