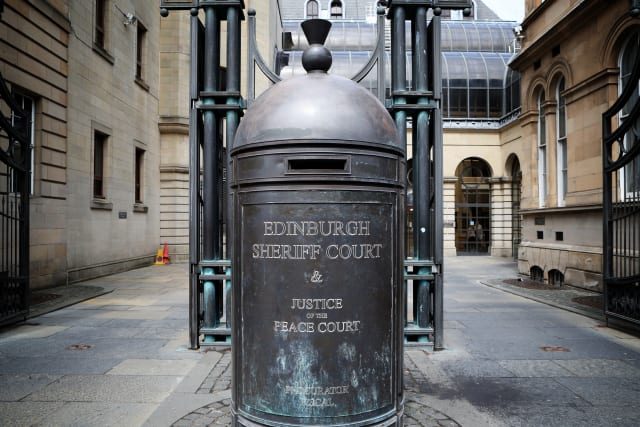 The partner of Motherwell FC manager Stephen Robinson has criticised domestic abuse law in Scotland as she told a court that prosecuting him was “unfair and wrong”.

Robyn Lauchlan, 28, said moves to prosecute in domestic abuse cases regardless of whether the alleged victim wants to press charges are “incredibly damaging to innocent people”.

She said the Northern Irishman did not assault her and she feels the prosecution service has ignored her voice.

Robinson, 45, is on trial at Edinburgh Sheriff Court accused of assaulting Ms Lauchlan on Waverley Bridge in the city on December 13 last year.

He is accused of grabbing her, pushing and pulling her and pinning her against a fence.

The football manager, who denies both charges, is further accused of behaving in a threatening or abusive manner by shouting, swearing and acting aggressively.

Ms Lauchlan told the court she sparked the incident on December 13 by becoming distressed after Robinson did not defend her when a man in an Edinburgh bar told her to “shut the f*** up”.

She said “I thought: ‘Why is (Stephen) not saying anything to this man who has just ridiculed me in front of everyone and Stephen has allowed him to do it?'”

Ms Lauchlan said she was drunk and stormed off through Edinburgh’s Christmas Market, shouted and swore at him but he was not aggressive to her and only put his hands on her to try to calm her down and get her to go home.

She said she accused him of not being loyal and wanted him to apologise.

Ms Lauchlan said he refused, saying: “I’m not going to fight some guy in a bar. If you want someone like that you need to go for somebody younger, that’s not me.”

She said when he was arrested she “broke down” and told police if anyone was being arrested it should be her as “Stephen has not done anything wrong”.

The court heard she wrote several letters to the procurator fiscal, including one criticising domestic abuse law.

“It terrifies me how easy it is to ruin someone’s life with this new law in place,” she wrote.

“It is so incredibly damaging to innocent people, especially those in the public eye.”

She added: “I have not been heard once despite the point of this new law being in place to protect those who cannot speak up for themselves.

“I find it disgraceful that the alleged victims are completely undermined with their truth not being heard.

“This is a situation where no assault has taken place and that has been stated from the beginning by myself and that is my truth.”

Giving evidence, she accused other witnesses of lying and said: “In my head you’ve got four people against the truth.

“The reality is I was drunk and I behaved like an idiot and he’s paying the price and it’s so unfair and wrong.”