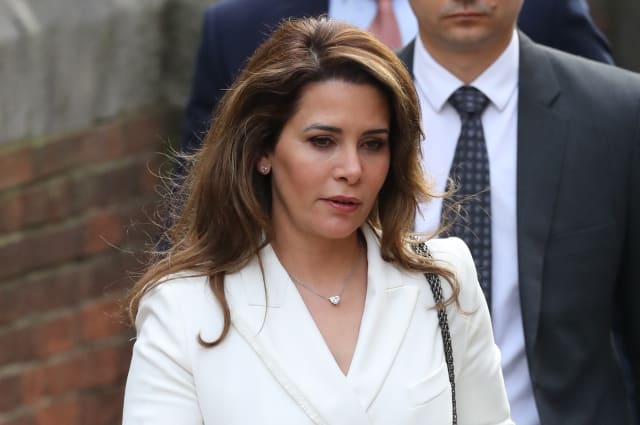 The ruler of Dubai has lost his appeal against a decision to publish two High Court judgments relating to his legal battle with his estranged wife.

Sheikh Mohammed bin Rashid Al Maktoum, 70, has applied to the High Court for the summary return to Dubai of his two children with Princess Haya Bint Al Hussein, 45, the half-sister of King Abdullah II of Jordan.

Sheikh Mohammed, who is also vice president and prime minister of the United Arab Emirates, challenged the decision to publish two judgments which relate to “certain disputed factual issues” and “issues arising out of the special position of (Sheikh Mohammed) as the sovereign and head of government of a foreign state”.

Princess Haya attended a hearing at the Court of Appeal in London on Friday, where Lord Justice Underhill announced that it was “the unanimous decision of the court” to dismiss Sheikh Mohammed’s appeal.

But the judge added that Sheikh Mohammed had the option to take his case to the Supreme Court, and that the judgments could not be published until any potential appeal had been determined.

After Lord Justice Underhill announced the court’s decision, the court sat in private, with members of the public excluded and journalists allowed to remain but not report details of the evidence and arguments.

At a hearing on Wednesday, Lord Justice Underhill said Sheikh Mohammed’s legal team argued that the decision by Sir Andrew McFarlane, the president of the Family Division, to publish the judgments was “wrong in law and that the judgments should not be published, if at all, in advance of the welfare hearing” next month.

The judge added that Sheikh Mohammed’s appeal – which “raises questions both about what is in the best interests of the children and about how to balance that, if necessary, against the right of the press to report matters of public interest” – was opposed by Princess Haya, the independent guardian “appointed by the court to represent the children’s interests”, and by a number of media organisations.

Sheikh Mohammed, the founder of the successful Godolphin horse racing stable, was not present in court on Friday but was represented by his legal team – which is headed by Lord Pannick QC, who acted for Gina Miller in the landmark Supreme Court case over the prorogation of Parliament.

Her legal team includes Baroness Fiona Shackleton, who represented the Prince of Wales during his divorce from Diana, Princess of Wales, and Sir Paul McCartney in his divorce from Heather Mills.

At a previous High Court hearing, before Sir Andrew in November, Tiina Jauhiainen – a friend of one of Sheikh Mohammed’s daughters from another marriage, Princess Latifa – and David Beck, formerly a detective chief inspector with Cambridgeshire Police, attended to give evidence to the court.

Ms Jauhiainen has previously said publicly that she helped Princess Latifa attempt to flee the UAE, before her friend was allegedly abducted and taken back to Dubai in March 2018.

Mr Beck, who led an investigation into the disappearance in 2000 of Princess Shamsa, Princess Latifa’s sister, has previously told the BBC that he applied to visit Dubai with the intention of speaking to Princess Shamsa but that his request was rejected, adding: “I was never given a reason why.”