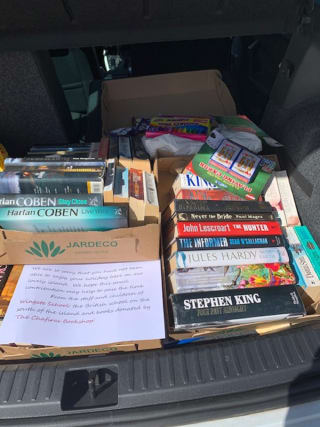 Quarantined holidaymakers in Tenerife have been offered some light relief by an international school on the island, which has donated books and games.

Jon Green, CEO of Wingate School in Arona, organised the donations after seeing tourists on the news complaining of boredom in the H10 Costa Adeje Palace hotel.

Mr Green’s mother Margaret, who has lived on the island for almost 50 years, visited a local bookshop who gave her more than 100 books for free.

Despite the “red tape” and heavy security surrounding the hotel, Ms Green was able deliver the gifts, which filled the boot of her car.

“I must say I think it would have been easier to break out of jail,” she said.

Accompanying the books and games was a note that read: “We are so sorry that you have not been able to enjoy your holiday here on our lovely island.

“We hope this small contribution may help to pass the time.”

Speaking to the PA news agency, Mr Green said: “Once I read in the news that tourists were getting very bored trapped in the hotel, I wondered what Wingate School could do to help.

“It occurred to me that we could donate books.

“(My mother) contacted people she knew and soon had a load of books and games collected up. The books were all donated by The Chafiras Bookshop.

“Then she had to deal with the red tape, as they weren’t letting anyone near.

“Luckily, she has lived on the island for almost 50 years and has many friends and acquaintances who could help her speak to the right people.

“Eventually, she managed to get these boxes to the hotel in the back of her car and the police let her through.”

Guests started to leave the locked-down hotel on Friday morning after undergoing screening for coronavirus, also known as Covid-19.

Overall, 130 guests from 11 countries have been told by Spanish authorities that they can leave, because they arrived at the hotel on Monday – after those who tested positive had been taken to hospital.

Sources told PA that around 50 of the British guests would be allowed to leave if they wanted to do so.

“I just hope that this goes some way to help relieve some of the frustration they must be experiencing and to let them know that people in Tenerife care about their plight,” Mr Green added.