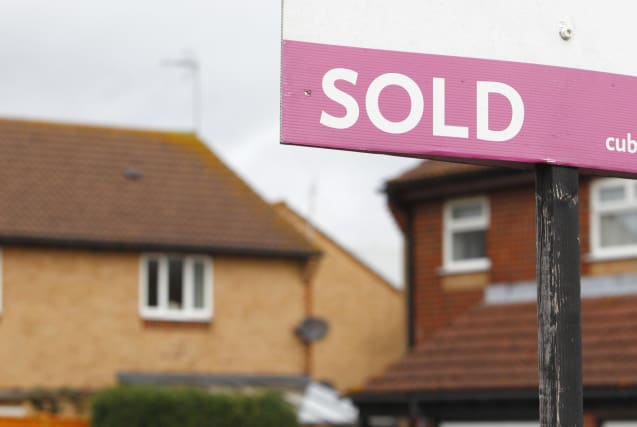 Annual house price growth accelerated to its strongest levels in around a year and a half in February, according to an index.

Across the UK, the average house price was £216,092 in February, following signs that December’s general election outcome may have boosted buyer sentiment, the report said.

But, looking ahead, the impact of coronavirus globally and uncertainty about the UK’s future global trading relationships will affect the UK economy, which in turn will have an impact on the housing market, it suggested.

“The decisive election outcome may have provided a boost to buyer sentiment.

“Recent data releases indicate that the housing market has gathered momentum in recent months and the latest house price figures are in line with that trend.

“The number of residential property transactions and mortgages approved for house purchase increased around the turn of the year and surveyors have reported an increase in new buyer inquiries.”

Mr Gardner said that looking ahead, economic developments will remain the key driver of housing market trends and house prices.

He said: “Business surveys suggest that activity recovered in the new year, but there are still significant uncertainties that threaten to exert a drag on the economy in the coming quarters.

“The global economic backdrop remains challenging, with the coronavirus outbreak expected to weigh on global activity in the coming quarters.

“Investment is likely to remain subdued until the UK’s future global trading relationships become clearer, which is unlikely until early next year.

“Overall, we expect the UK economy to continue to expand at a modest pace in 2020, with house prices remaining broadly flat in 2020 as a whole.”

“We’re seeing buyers flock to the market in numbers looking to take advantage of greater economic stability, confidence and clarity.”

Howard Archer, chief economic adviser at EY ITEM Club, said: “A recent stream of firmer data and surveys suggest the housing market has changed up a gear after a lacklustre 2019.

“The housing market has seemingly got a leg-up from increased optimism and reduced uncertainties following December’s election.”

He continued: “While we suspect that the housing market may get a further near-term boost from reduced uncertainties, we remain relatively cautious over the sector’s overall prospects for the whole of 2020 and suspect that the upside may well be limited.”

Mark Harris, chief executive of mortgage broker SPF Private Clients, said: “There has been a shift in sentiment among buyers and sellers following the election and more certainty with regards to Brexit.

“Activity has noticeably picked up and with all lenders keen to do more lending this year, there should be plenty of attractive deals to attract buyers. There is more positivity than we have seen in a while, which bodes well for the traditionally busier spring market.”

Jeremy Leaf, a north London estate agent and a former residential chairman of the Royal Institution of Chartered Surveyors (Rics), said: “This is the latest in a series of surveys – and one of the most respected – which confirm what we have seen in our offices, that confidence returned, even before the election.

“Recovery will only be sustained if stock levels and the pace of sales improve. However, the activity will be short-lived if sellers do not recognise the market remains sensitive and buyers won’t overpay.”

Samuel Tombs, chief UK economist at Pantheon Macroeconomics, said: “We do not think that affordability is so stretched that the market will lose momentum soon.

“Moreover, interest payments absorb a record low share of incomes, thanks to the fall in mortgage rates.

“With no increase in mortgage rates on the horizon and wage growth set to remain strong this year, we expect house prices to rise by about 4% over the course of this year.”