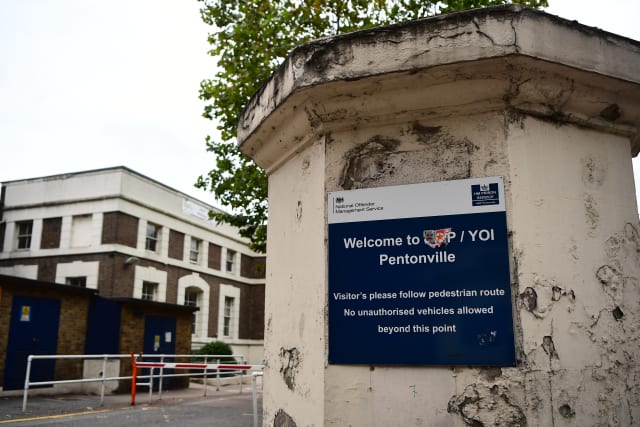 Two London jails have been put into the equivalent of special measures after concerns were raised about rising levels of violence and drugs and plummeting safety levels.

HMP Pentonville, one of the country’s oldest and busiest jails, and young offenders’ institution Feltham A have been placed in the Government’s new Prison Performance Support Programme (PPSP).

The project replaces what was previously known as “special measures” which would see the Government step in to address concerns at failing prisons.

Four other prisons which are already in special measures, Wormwood Scrubs, Bedford, Bristol and Hewell prisons, have also been named as those to receive extra support under the programme.

Meanwhile volunteers appointed by justice ministers to scrutinise prison conditions claimed Government neglect “directly contributed” to an “alarming rise” in violence and drugs at the jail.

In October prisons inspectors called on Justice Secretary Robert Buckland to intervene to bring “radical” and lasting change at Feltham A, which holds criminals aged 15 to 18, after an “extraordinary” plunge in safety levels.

The Government had already made a series of pledges for improvements there after it was put on notice to set out how to tackle the problems earlier this year under the Urgent Notification (UN) protocol, used by inspectors to highlight significant concerns.

Under the new programme resources and support will be similar to those available in the special measures regime but will be “concentrated” on fewer prisons to begin with and will offer “tailored support”, according to officials.

The Ministry of Justice (MoJ) said the small number of chosen jails will be “boosted by measures including additional staff, enhanced standards training and tough airport-style security, in order to bring stability”.

The programme aims to raise standards “as quickly as possible” by focusing more funding on the select prisons, offering extra staff training and analysing data to help improve living and working conditions.

Patrick Butler, governor at HMP Bedford, said: “The investment in modern technology and additional resources will greatly help us to restrict the supply of drugs and other illicit items, which cause misery and harm.”

Prisons minister Lucy Frazer said: “We know that some prisons face deep-rooted issues that cannot be fixed overnight, which is why this programme will be vital to support and improve them.

“This co-ordinated, intensive support represents a step up in our response to the long-term challenges affecting certain jails.

“Allied to the £2.75 billion this Government is investing to transform the estate, improve security and promote rehabilitation, this is another way in which we will drive up standards.”