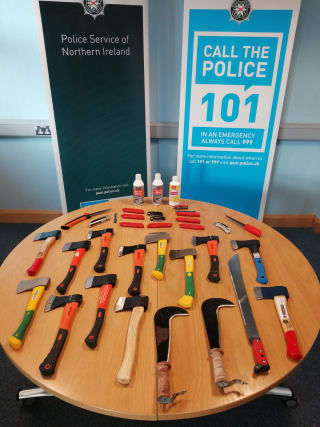 A machete and hatchets were among the weapons seized as police arrested three people after a disturbance at a funeral.

Scuffles broke out during the service at a church on the Melmount Road in Strabane on Thursday morning.

The incident prompted a significant police operation and three males, aged 17, 22, and 32 were detained.

The Police Service of Northern Ireland (PSNI) released a picture of the weapons seized by officers, which included two billhooks, several Stanley knives and more than a dozen hatchets were seized.

No serious injuries were reported.

The PSNI said it was aware of online reports that shots had been fired but said officers had found no evidence to support those claims.

“A disturbance did break out within the church however it was quickly addressed.

“A number of dangerous weapons were seized and we are thankful to have been able to remove these items from the streets.

“We are aware of tensions between individuals who were in attendance at the funeral and I am appealing to anyone with influence to help bring about a calm resolution to the current issues.”