Statues celebrating a century of cinema unveiled in Leicester Square 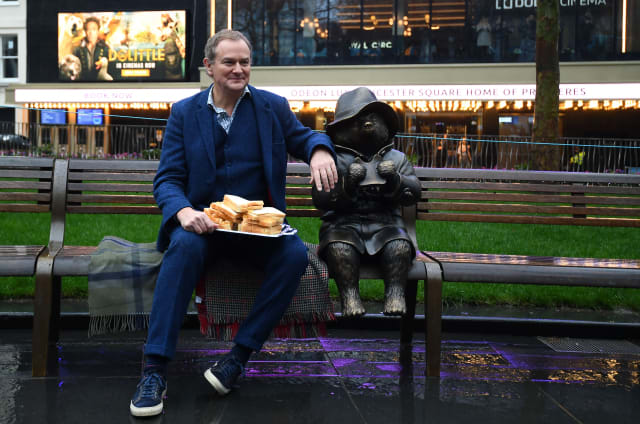 Statues of significant moments and characters from cinema have been unveiled in Leicester Square as a celebration of London’s film industry.

Bronze depictions of Paddington Bear, Mr Bean, Mary Poppins, Laurel and Hardy and Bugs Bunny have all gone on display.

The statues “add to the texture of the square”, according to Hugh Bonneville, who has played Mr Brown in the Paddington films.

After unveiling the Paddington statue, he told the PA news agency: “I think this is going to bring a lot of pleasure to a lot of people who can sit and have their lunch alongside [Paddington].

“It is gorgeous. All these statues all around the square are really remarkable and beautiful evocations of our great industry.”

He added that Paddington is a fitting character to have represented in the square because he “really does represent London and strangers coming to town and the welcome that London can give them”.

Each of the statues is a nod to a different decade in cinema, with almost all decades from the 1920s until now represented in the square.

Wonder Woman, Batman and Gene Kelly in Singin’ In The Rain are among the other statues.

Kelly’s widow Patricia Ward Kelly unveiled the statue of him swinging from a lamppost.

She said: “I think it is a superb idea to have the figures from the different decades and I’m really glad that Gene got to be able to be in this.

“I think it will be a really wonderful draw to Leicester Square and remind people of the incredible history here.

“I think Gene would be very, very proud because London was very important to him.

“He lived here and Leicester Square was very important because his films premiered at the Odeon here.”

Leicester Square was first home to a cinema in 1930, with the first premiere taking place there in 1937.

The square has subsequently cemented its place in British cinema history and regularly plays host to some of the most high-profile events in the country’s film calendar.

Visitors to the square can use an app to find the statues and watch clips from the films on their mobile phones.