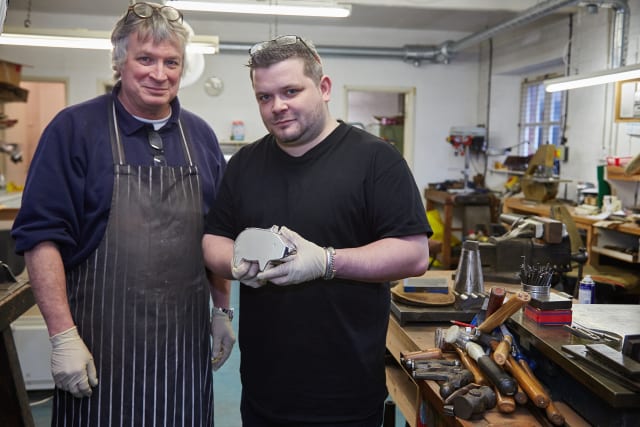 The Royal Mint has unveiled the world’s most expensive piggy bank – an 18-carat gold design costing £100,000.

Bristol-based silversmiths Phillip Kydd and his son James have created the model, which is part of a range of piggy banks called Minty.

A sterling silver edition, retailing at £6,000, will also be available, as well as ceramic designs from £85.

It is the first piggy bank in the Royal Mint’s 1,100-year history and is part of the company’s new range of gifts and jewellery.

Helen Cooper, director of gifting at the company, said: “We’re renowned for our gold and silver coins, so it was a natural step to create an equally exquisite piggy bank.

“This 18-carat gold Minty will be made to order, and hand-crafted to ensure it is the most luxurious piggy bank in existence.”

Mr Kydd, who is based in Barrow Gurney, near Bristol, has been a silversmith for almost 40 years.

His son James started an apprenticeship under the Goldsmiths Company Apprenticeship Scheme with his father more than five years ago.

Each piggy bank is crafted using traditional tools and skills, with each sterling silver model taking up to 40 hours to complete.

“My son and I were very much working as a team on this project and thoroughly enjoyed the challenges we faced to produce the end product we are sure customers will cherish,” Mr Kydd said.

“It is wonderful to see something that was made by father and son being sold by the Royal Mint.”

Both the gold and sterling silver editions of Minty, featuring the Royal Mint’s Tower hallmark, will come with certificates of authenticity and an individual issue number.