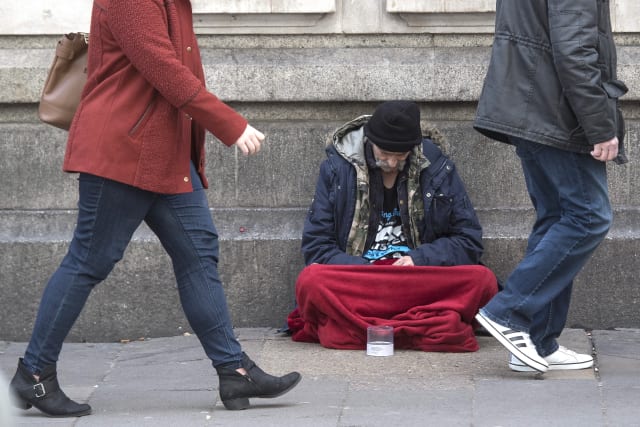 The number of people sleeping rough on the streets of England has fallen for a second year in a row, according to official figures.

The Ministry of Housing, Communities and Local Government estimated that 4,266 people were sleeping rough on a single night in autumn 2019.

Homelessness charity St Mungo’s said the figures are “simply not good enough” and called on the Government to invest an extra £1 billion a year in services for the homeless.

However, Housing Secretary Robert Jenrick said the fall in numbers represents a “positive start” and that the Government remains committed to eradicating the “social ill” of rough sleeping.

“It is a moral scandal that in 2020 so many people continue to sleep rough on the streets, and that is why I am determined to end the blight of rough sleeping by the end of this Parliament,” he said.

“This confirms what I have seen since becoming Housing Secretary – that dedicated, targeted support backed by unparalleled levels of Government support is getting vulnerable people off the streets and into safe accommodation where they can turn their lives around.”

The latest snapshot came as Boris Johnson announced £236 million in additional funding to provide “move on” accommodation for up to 6,000 rough sleepers.

The Prime Minister has also appointed former homelessness tsar Dame Louise Casey to carry out a review into the causes of the problem.

The figures showed the number of people sleeping rough in London has decreased for the first time in six years.

The South West was the only region where there was a notable increase, with 490 people sleeping rough – a rise of 32, or 7%.

'We're not done yet': Coronavirus lockdown must be extended, government confirms