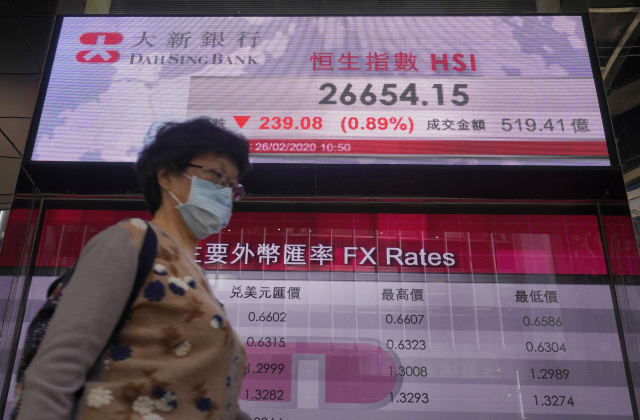 Markets around the world reacted with fright on Thursday as stock exchanges plummeted with the Covid-19 outbreak showing now sights of slowing.

In falls not seen since the financial crisis, the FTSE 100 leading index of companies has now lost £152 billion since the start of the week, closing out the day down 3.5%, the same fall as Monday, to levels not seen in 13 months.

The same effect was felt across Europe, with French and German indexes falling by similar amounts to the UK, as investors try and work out what impact the virus has on the world economy.

And in the US, where Donald Trump has attempted to boost the stock market by playing down fears of a pandemic, the Dow Jones has lost 3,400 points in the space of a week.

On the London Stock Exchange, airlines took the brunt of the huge selloff, as holidays were cancelled and businesses told to avoid sending workers to affected areas.

EasyJet's shares have dropped 30% since Monday.

The fall means the index has dropped by more than 10% since the start of the year, as traders and investors worry over how long the outbreak will last.

David Madden, an analyst at CMC Markets, said: "The week has been awful... as traders are petrified of a pandemic, but today's session has been the most painful.

"The fear factor is ramping up and in turn, we are seeing traders drop stocks at an increasing pace.

"Dealers are rushing for the exit as the chatter about the global economy being hurt because of the coronavirus has risen."

Connor Campbell, an analyst at SpreadEx, said: "This is one of the worst weeks in recent memory – and terrifyingly, it's not over yet. Friday is a tricky proposition... (but) One way or the other, it's hard to see any tangible good news appearing to generate a sustainable rebound."

On Thursday Aston Martin warned demand for its cars in China could fall and its supply chain from the country is also under strain.

Reckitt Benckiser enjoyed a boost in sales of cleaning products and Rentokil reassured shareholders it had enough hand sanitiser for at least the next few months.

On Friday, British Airways' owner International Airlines Group, has its planned results day, where the company is expected to update the markets on its own impact from the outbreak.