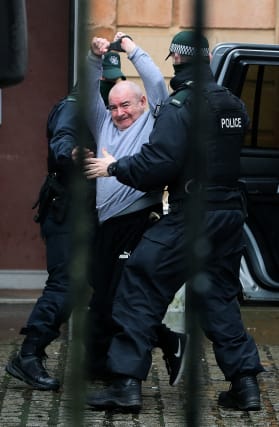 A man accused of murdering journalist Lyra McKee has been granted bail.

Paul McIntyre, 52, appeared to punch the air as a district judge delivered his decision.

But he will remain in Maghaberry high-security prison in Co Antrim pending the outcome of an appeal against the bail decision at the High Court in Belfast.

Ms McKee, 29, was shot dead by dissident republicans while observing a riot in Londonderry in April last year.

Judge Barney McElholm said: “Society is demanding justice for Lyra McKee. But justice is no good if one-sided, biased or not seen to be unscrupulously honest.”

The judge said he had supported the rule of law for decades.

“I will grant Mr McIntyre bail,” he added.

An extremist group styling itself as the New IRA said it carried out the killing.

Ms McKee was standing near a police vehicle when she was hit by a bullet fired by a masked gunman towards officers during disturbances.

Images before the court showed someone appearing to pick up casings from the bullets fired.

Mr McElholm said there was “no smoking gun”, as such, in this case.

He questioned the police’s use of an expert to match photographs of McIntyre from earlier with the Creggan estate murder scene in a bid prove he lifted up the casings.

The judge said: “This particular murder has been greeted with almost universal condemnation in society.”

He added he “could not understand” those who espoused violence.

Police believe the man accused of murdering the journalist was the same height as someone seen removing the casings, a detective told the court.

An officer told Mr McElholm a mapping expert had visited the scene in an effort to prove that a person photographed there was the same height as McIntyre.

His height was recently measured while in prison as 1.6 metres, the court heard.

McIntyre’s defence lawyer Derwin Harvey attacked the credibility of the expert witness used by the police.

He said the challenges facing a successful prosecution are “insurmountable”.

McIntyre is also charged with possession of a firearm with intent to endanger life and belonging to or professing to be a member of a proscribed organisation.

His address was given in court as Kinnego Park in Derry.

Dressed in a red jumper, he sat throughout the hearing before the district judge in Londonderry which was relayed via video link to Maghaberry.

A prosecution barrister said the bail decision will be contested at the High Court.

Ms McKee’s partner Sara Canning and a number of her friends were in court.

No protest in support of the accused was held outside the court, as had been the case for his previous appearance.

Police officers were inside the courthouse.

The case will return to court next month.