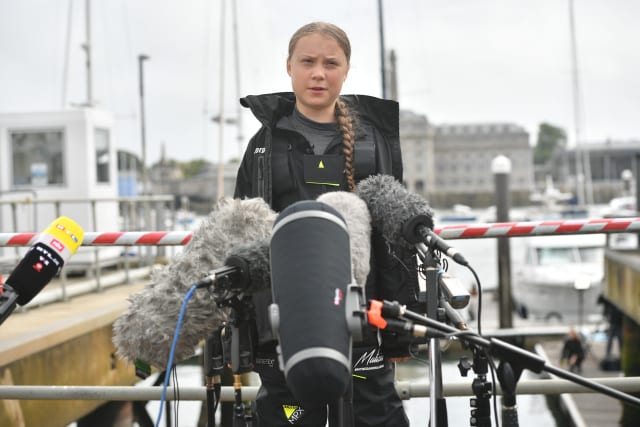 Avon and Somerset Police expect thousands of people to be at the Bristol Youth Strike 4 Climate on Friday to hear the 17-year-old climate activist speak.

The force said there was potential for protesters to be hurt from either tripping, falling or being crushed by the crowds and stressed that "parents are responsible for their children".

It advised people to make their own safety arrangements.

The Swedish climate change campaigner is due to address the event before protesters march around the city centre to highlight the danger to the planet from climate change.

Greta had originally intended to visit London, but as the area planned for the protest in the capital was too small the organisers had recommended Bristol instead.

Police and Bristol City Council have warned of "major disruption" due to the event and said people from across the UK were planning on attending.

In a joint statement, Mike Jackson, the council executive director, Bristol police commander Superintendent Andy Bennett said: "We have seen a number of protests over the last year however this one will be significantly larger so we want to ensure that anyone planning to attend is prepared and able to make their own safety and safeguarding arrangements.

"Bristol City Council and the Avon and Somerset Police are unable to accurately predict how large this event will be however we have confirmation of people travelling from across the UK to attend.

"The event has grown so large that the usual controls, stewarding and safety measures that are routinely put in place by the teenage Youth Strike 4 Climate organisers may not be adequate, especially for primary school children and people with disabilities.

"We would therefore encourage those attending, or who are responsible for children who wish to attend, to consider their arrangements carefully and make their own informed decisions."

They said that some roads would be closed by the council in order to reduce the risk of harm to motorists, pedestrians and protesters.

"In terms of big crowds, there is the potential for trips, slips, falls and crushing. People can easily be separated from their friends and family," they said.

"Please do not underestimate the scale of this protest.

"We're working to ensure Bristol is open as usual, but would urge people to allow extra time for travel and consider whether their journey is necessary."

Two years ago, the teenage activist started missing lessons most Fridays to protest outside the Swedish parliament building, in what turned out to be the beginning of a huge environmental movement.

She has become a leading voice for action on climate change, inspiring millions of students to join protests around the world.

Life on the inside: 10 quick ways to keep your garden tidy