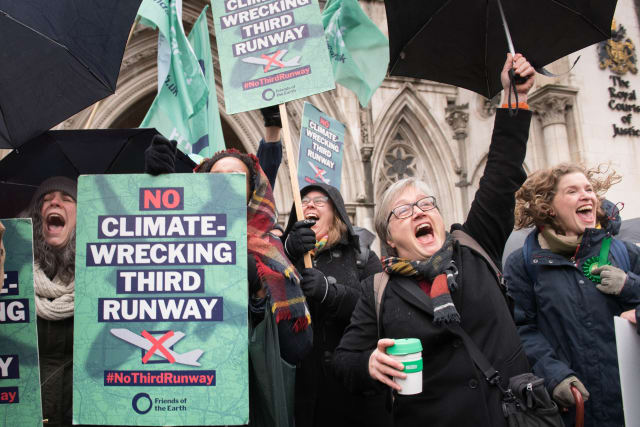 The future of Heathrow expansion is uncertain after leading judges ruled that the Government must reconsider its support for a third runway because of the environmental impact.

The Court of Appeal concluded that the Secretary of State for Transport failed to take account of the Government’s commitments to tackling climate change when setting out support for the project in a National Policy Statement (NPS).

The appeal was brought by a group of councils in London affected by the expansion, environmental charities including Greenpeace, Friends Of The Earth and Plan B, and London Mayor Sadiq Khan.

Campaigners hailed the ruling as a victory, and said it had “killed off” plans for a third runway for good and that the project is now “politically unacceptable”.

However, Heathrow Airport insisted it will press on with expansion and will work with the Government on the climate change issue, with a spokeswoman saying it is “eminently fixable”.

Giving their ruling on Thursday, Lords Justice Lindblom, Singh and Haddon-Cave said the NPS was unlawful because then-transport secretary Chris Grayling failed to take account of the Government’s commitment to the Paris Agreement – which commits signatories to tackling climate change by taking measures to limit global warming to well below 2C.

Lord Justice Lindblom told a packed court: “The Paris Agreement ought to have been taken into account by the Secretary of State in the preparation of the NPS and an explanation given as to how it was taken into account, but it was not.”

He said that, having seen the decision in advance, the Government did not oppose a declaration that the NPS was unlawful and has not sought permission to appeal to the Supreme Court.

The ruling means that current Transport Secretary Grant Shapps will have to review the NPS to ensure it accords with the Government’s commitments on climate change.

The appeal was brought by a coalition of councils, environmental campaigners and Mr Khan against a High Court ruling in May last year, which rejected four separate judicial reviews of the Government’s decision to approve the plans.

Mr Khan said in a statement: “The Government must now finally see sense and abandon plans for a third runway at Heathrow.

“We really are facing a climate emergency and it’s about time the Government started taking action to address this.

“I will continue to stand up for London by doing everything I can to stop a new runway at Heathrow Airport.”

Prime Minister Boris Johnson opposed the expansion of the west London airport when he was London’s mayor and promised to “lie down … in front of those bulldozers” to stop the runway being built.

Earlier this month, he said there was “no immediate prospect” of construction beginning.

John Sauven, executive director of Greenpeace UK, said: “Boris Johnson should now put Heathrow out of its misery and cancel the third runway once and for all. No ifs, no buts, no lies, no U-turns.”

John Stewart, who chairs anti-expansion group Hacan, told the PA news agency: “This ruling has killed off the third runway for good.

“Although it invites the Government to review its policy, I suspect that the current Prime Minister, Boris Johnson, doesn’t want to review the policy and will use this as a way of killing off the third runway.”

Will Rundle, head of legal at Friends of the Earth, said: “We are delighted with the Court of Appeal’s ruling, which goes to show the massive importance of the legal system to check the clear abuse of state power by Government, such as in this case.”

Tim Crosland, director of pressure group Plan B, said: “We welcome the ruling of the court and we welcome the Government’s acceptance of it. The Government has a crucial responsibility to show real climate leadership ahead of COP26 and this is an important start.”

The court rejected a number of other grounds of appeal and a separate appeal by consortium Heathrow Hub, which has a rival proposal for airport expansion.

A Heathrow spokeswoman said: “Expanding Heathrow, Britain’s biggest port and only hub, is essential to achieving the Prime Minister’s vision of global Britain.

“We will get it done the right way, without jeopardising the planet’s future. Let’s get Heathrow done.”

Support from Labour MPs helped push through the proposals to expand Europe’s busiest airport with an overwhelming majority of 296 in a Commons vote in June last year.

Mr Grayling said at the time that the new runway would set a “clear path to our future as a global nation in the post-Brexit world”.

Heathrow says it could open the third runway “between early 2028 and late 2029”.

Its previous target date was 2026.

The airport said the delay was due to the Civil Aviation Authority, which refused to approve its bid to nearly quadruple the amount it spends before obtaining final planning permission.