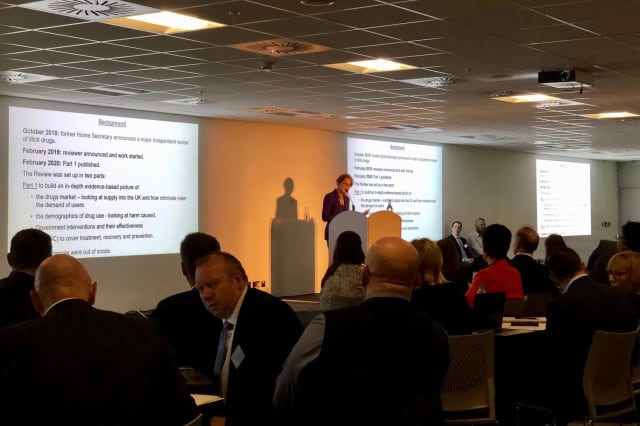 The availability of some drugs on Britain’s streets is almost as easy as getting a pizza, it has been claimed.

Dame Carol Black presented the findings of her report on Thursday at the UK Drugs Summit in Glasgow.

Her drugs review put the cost of the illicit trade to society at around £19 billion a year and said budget constraints have negatively affected the main agencies responsible for halting their supply.

Dame Carol started by telling the conference at the SEC: “As all of you will know I am not a drug expert, I’m the independent reviewer.

“I tried very, very hard to find the evidence and to present it in this report.

“We have an abundant supply coming into our countries from around the world, more than ever before.

“It wouldn’t be too far to go to say it’s almost for some drugs as easy as getting your pizza.”

She added: “At the same time we have seen a reduction in very good treatment and recovery, and that again all adds up to leave us as you will see in this report with the perfect storm.

“I believe this perfect storm will not go away unless Government takes action.”

While most of the evidence presented was from England and Wales, Dame Carol touched upon treatment and recovery being important to all four nations in the UK.

It comes the day after a similar event held at the same venue – with calls made at the Scottish Drugs Deaths Conference for safer drug consumption rooms to be trialled in Glasgow.

Although Dame Carol did not delve into specific treatment options, she said: “We have a cohort of people who, as I did the review, I considered we were serving less and less well.

“If you had cancer and let’s say diabetes we would try very, very hard to treat you with the best drugs available as quickly as possible to get on top of the problem.

She added that those addicted to drugs will “do anything to serve that addiction”, including commit crime.

“Recovery is as important as treatment. If you don’t do this people will go back to their habits,” she said.

During a brief Q&A, Dr Catherine Calderwood, chief medical officer for Scotland, expressed how struck she was by the findings.

She told Dame Carol: “We have our own statistics in Scotland which are indeed something that we are taking very seriously … and utterly agree with your description of people with addiction as being people with a chronic long-term condition.

“We have treated people as criminals, we have pushed them through our justice system, we have not treated these as vulnerable people with very complex needs often driven into these drug habits through their own circumstances.”

She added: “We do not treat any other people in our system in this way. We do not have investment in the drugs we know that work.

“We have not taken this as a long-term condition and put people in treatment that is bespoke for their conditions and we have not helped them on their road to recovery.

“I would hope a summit like this with the people here from all across the departments and the four UK nations that this might be a turning point to start treating these people as people rather than having them thrown out to some extent of our system.”