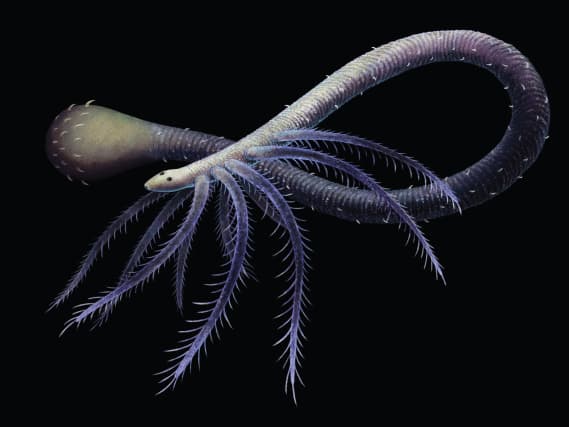 The oldest example of an animal evolving to lose body parts it no longer needed has been discovered by scientists.

Mystery has long surrounded the evolution of Facivermis, a worm-like creature that lived approximately 518 million years ago in the Cambrian period.

Its long body and five pairs of spiny arms near the head suggested it might be a missing link between some worms and a group of fossil animals called lobopodians, which had paired limbs all along their bodies.

However, a new study published in the journal Current Biology reveals Facivermis – less than 10cm in length – was itself a lobopodian.

Researchers at the University of Exeter, Yunnan University and the Natural History Museum found that the creature lived a tube-dwelling lifestyle anchored on the sea floor, and so evolved to lose its lower limbs.

Lead author Richard Howard said: “A key piece of evidence was a fossil in which the lower portion of a Facivermis was surrounded by a tube.

“We don’t know the nature of the tube itself, but it shows the lower portion of the worm was anchored inside by a swollen rear end.

“Living like this, its lower limbs would not have been useful, and over time the species ceased to have them.

“Most of its relatives had three to nine sets of lower legs for walking, but our findings suggest Facivermis remained in place and used its upper limbs to filter food from the water.“This is the earliest known example of ‘secondary loss’ – seen today in cases such as the loss of legs in snakes.”

Scientists believe the Cambrian period was the dawn of animal life, and the researchers were fascinated to find a species evolving to be “more primitive” even at this early stage of evolution.

Senior author Dr Xiaoya Ma said: “We’ve known about this species for about 30 years, but it’s only now that we’ve got a confident grasp of where it fits in the evolutionary tree.

“Studies like this help us understand the shape of the tree of life and figure out where the adaptations and body parts we now see have come from.”