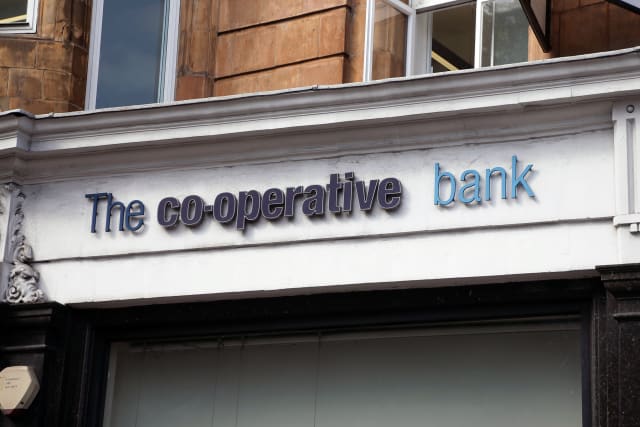 The Co-operative Bank has insisted it is on track to begin returning to profit next year, despite mounting losses amid intense mortgage competition and a hit from payment protection insurance.

It was pushed deeper into the red by a £62.5 million bill for payment protection insurance (PPI) mis-selling after a rush in claims ahead of the August deadline, as well as nearly £100 million under an investment plan.

But chief executive Andrew Bester told the PA news agency that the first stage of a five-year turnaround was “successfully completed”, putting it on course to return to profit towards the end of 2021.

Stripping out the costs of investment and PPI, the Co-op Bank reported underlying pre-tax profits of £19.7 million, against profits of £23.6 million in 2018.

The group is part-way through a turnaround plan after a difficult period, which saw hedge funds take majority control of the lender in 2017 to save it from near-collapse.

The £700 million rescue deal saw the bank effectively sever its historic relationship with the Co-operative Group and separate itself from the wider mutual’s pension scheme.

The Co-op Bank said it had now separated its IT systems from the Co-op Group.

Mr Bester said: “While there is still work ahead, we have significantly improved our digital proposition and reinvested in our distinctive ethical brand.

“Having tackled the legacy issues of the past, we now have the foundations for the bank to grow.

“We will continue to invest in our business and will get to profitability towards the back end of 2021.”

But it is battling against difficult trading conditions in the mortgage market, with stiff competition on rates knocking profit margins for all retail banks.

Despite the widened losses, the bank’s annual report published separately on Thursday showed Mr Bester picked up a £455,000 bonus for 2019, taking his total pay for the year to £2.6 million.

It shared out £7 million bonuses among its 3,327 staff last year.

Mr Bester sought to assure that Co-op Bank would not be following the lead of its rivals by cutting any of its 68 branches and aimed to keep its workforce stable in spite of cost-cutting targets.