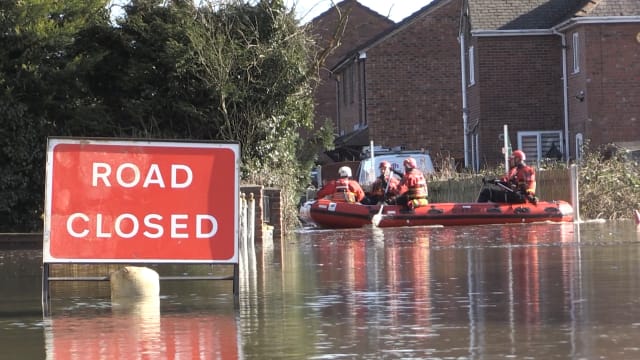 A vintage car salesman has thanked members of the public who helped him save classic models from rising flood water which swamped his business.

Chris Marlowe, 53, said up to 30 local people in Snaith, East Yorkshire, waded in to the rising waters and helped save around three-quarters of his stock.

But the family business Yorkshire Classic Cars, which remains open despite being uninsured for flooding, suffered damage to around 25 vintage models which will need hours of work if they can be repaired.

Much of the paperwork associated with older vehicles, such as logbooks and service histories, was in the office at the site, which is currently under around 7ft of water.

Mr Marlowe said he is angry about a lack of warning before the flooding struck, meaning he struggled to get his stock to safety.

Mr Marlowe said he will write to his MP asking why the village flooded with so little warning.

More than 50 homes in Snaith have been evacuated following the worst floods for more than 70 years.

The Environment Agency said flood waters will not recede for another week after the River Aire burst its banks.

East Riding of Yorkshire Council said it believes water levels in the village have now stabilised, but with more rain forecast there could be further flooding.

Phil Duckles, station manager with Humberside Fire and Rescue, said boat teams are working in the area to visit flood-hit residents who had stayed put and did not want to evacuate.

Becky and Adam Petch, who live in flooded George Street, said they are in the hands of “mother nature” after the water reached their garden.

She said: “From people we have spoken to, in 1947 when it flooded, it only came up to the doorstep.”