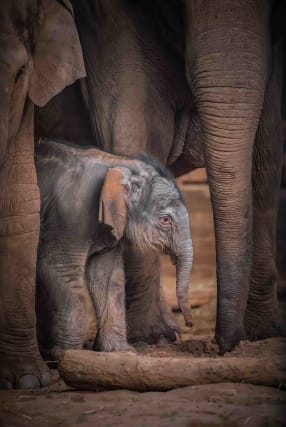 The healthy female was born to 15-year-old mum Sundara Hi Way and both are doing “ever so well”, the zoo’s elephant experts have said.

The birth, which was captured on the zoo’s CCTV cameras on Wednesday afternoon, followed a 22-month gestation period.

Keepers have yet to decide on a name for her, but the new calf has received a warm welcome from the rest of the family herd, including her one-year-old half-brother Anjan and three-year-old sister Indali.

Katie Morrison, assistant team manager of elephants at the zoo, said that the birth was a “great learning experience” for the other animals.

“A birth is a wonderful, positive social event for the elephants and is always a great learning experience for the family herd, particularly the younger members,” she said.

“The excitement levels really build when a calf is due and, as soon as Sundara went into labour, it was obvious to the other herd members that something special was about to take place.”

Asian elephants are listed as “endangered” by the International Union for the Conservation of Nature (IUCN), due to threats from disease, poaching and the destruction of their natural habitat.

The calf was delivered after a 20-minute labour but was on its feet and suckling within minutes.

“It was wonderful to see. So far both mum and calf are doing ever so well indeed,” Ms Morrison added.