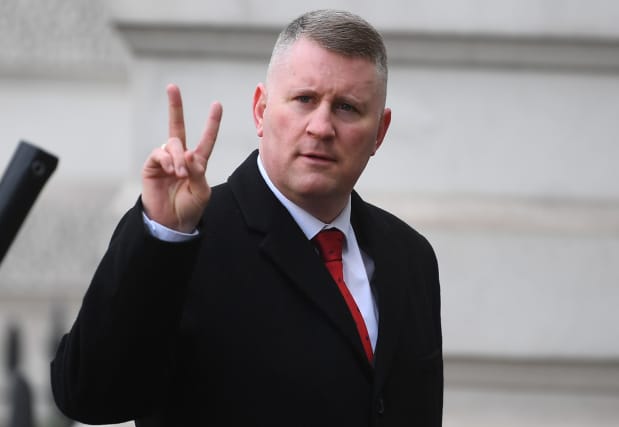 The leader of far-right political group Britain First has denied a terror offence after refusing to give police access to his phone.

Paul Golding, 38, was charged under the Terrorism Act after he refused to give police the passcodes for a number of his electronic devices while entering the country last October.

He appeared at Westminster Magistrates’ Court on Thursday, accompanied by 26 of his supporters, and denied a charge of willingly refusing to comply with a duty under Schedule 7 of the Terrorism Act.

The court heard Golding was stopped at Heathrow Terminal 4 on October 23 last year when he refused to give the passcodes.

Golding, of Hodder Bank, Stockport, was in the dock wearing a grey suit and red tie and waved as his supporters entered the public gallery.

As he entered his not guilty plea, he told the court: “I am a politician not a terrorist, I think this is a politically-motivated charge.”

Two uniformed police officers were in the court during the short hearing.

He will appear for trial at Westminster Magistrates’ Court on May 20.

The trial is expected to last half a day and will feature live evidence from two police officers involved in the stop.

Schedule 7 of the Terrorism Act allows police to interrogate, search and detain anyone for up to six hours at UK ports.

It is designed to determine whether an individual is involved in the “commission, preparation or instigation” of acts of terrorism.

Couple collect food order by lowering bag from their balcony

Stargazers marvel at emerging pink supermoon in skies above UK