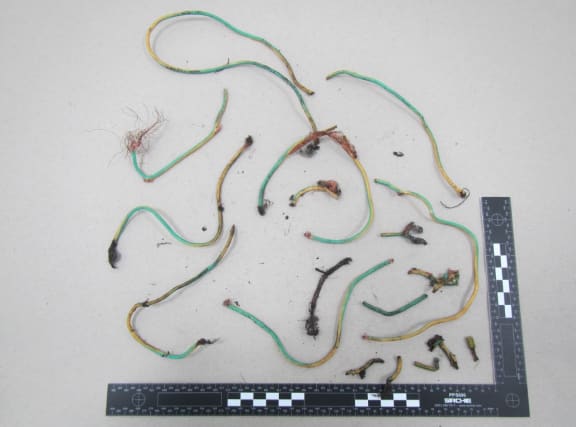 A mock-up of the deadly device used by Manchester Arena suicide bomber Salman Abedi has been shown to jurors.

Abedi used a detonator – probably made of thin pieces of metal from rolled up cans – which was inserted into a paint tin containing up to five kilos of the highly-explosive homemade substance TATP, the Old Bailey heard.

The five-litre paint tin was then placed inside a much larger novelty money tin, with the space inside packed with thousands of nuts and screws designed to injure and kill those nearby, the court heard.

Abedi detonated the device possibly by using a rocker-switch in his jacket pocket, Lorna Philp, principal case officer with the Forensic Explosive Laboratory in Kent, said.

A total of 22 innocent bystanders were killed and hundreds more were injured as Abedi detonated the device at the end of an Ariana Grande concert at the venue on May 22, 2017, sending 28kg of shrapnel flying in all directions.

Remnants of drinks cans, a paint tin and a novelty money tin were all recovered from the scene of the blast as forensic officers scoured for clues in the aftermath of the atrocity.

Abedi’s brother, Hashem Abedi, is on trial accused of plotting the attack.

Ms Philp explained how components of the explosive TATP (also known as Tri-acetone Tri-peroxide) found at the scene could be made from readily available high street products.

She said a green piece of material found at the scene was likely to be that of a boiler suit, probably placed in Abedi’s rucksack before he detonated the device.

The witness said: “It may have been in the rucksack either to disguise the shape of the tin, to hold the contents inside, or possibly cover the device if the bag was opened.”

She added it was likely the explosion was triggered by a switch pressed by the perpetrator, “possibly (in) the jacket pocket”.

Ms Philp said traces of TATP were discovered at Granby Row – the one-bedroom flat Salman rented in central Manchester in the days before the bombing – as well as at Somerton Court, a sublet property he briefly rented in Blackley, north Manchester, weeks earlier, and in the Nissan Micra bought by the brothers in April 2017.

She said it was “possible” the Micra had been used to transport the TATP, and put forward the theory that the explosive was manufactured in Blackley.

Explaining her analysis, Ms Philp said: “TATP was manufactured in Somerton Court between February and April 2017.

“This was then stored, primarily while wet, before being transferred to Granby House in May 2017.

“The explosive was dried at Granby House, possibly by being laid out on sheets of carpet protector, then put into the explosive device.

“It is possible containers holding the explosive were stored in the Micra.

“However, very small traces found are more consistent with it being transported.”

She said it would have been “safer to manufacture TATP in smaller batches over a longer period of time”.

Hashem Abedi denies 22 counts of murder, one count of attempted murder encompassing the injured survivors, and conspiring with his brother to cause explosions.

The trial was adjourned until Friday morning.