About 50 Britons at coronavirus quarantine hotel allowed to leave 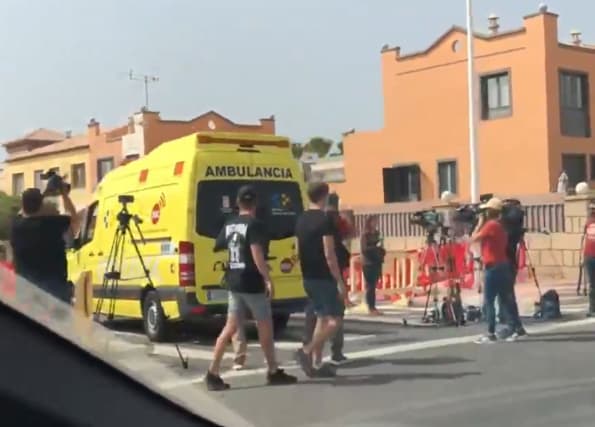 Around 50 Britons quarantined at a coronavirus-hit Tenerife hotel have been told they can leave, the PA news agency understands.

Some 168 British nationals are among hundreds of guests being kept at the four-star H10 Costa Adeje Palace in the south west of the Spanish island after at least four guests, including an Italian doctor, tested positive for coronavirus.

Those who can leave are understood to have arrived on Monday, after the guests who were diagnosed had already left.

A statement from the Foreign Office said: “We are urgently seeking clarification from the Canary Island authorities following their announcement that 130 tourists of different nationalities will be granted permission to leave the Costa Adeje Palace Hotel.

“We continue to offer support to all British nationals at the hotel.”

A British man, who did not wished to be named, told PA the hotel was unable to enforce quarantine measures and nobody felt safe.

Another said an aqua gym class was held on Thursday morning in the hotel pool.

All of those on site were initially told to stay in their rooms but local authorities have now said people without symptoms can move around the hotel, including to the pool and bar.

This has raised fears that the virus will spread rapidly among the guests, with social media photos showing people not wearing face masks and sharing buffet meals.

Steve McHardy, 53, an estate agent from Kinross, in eastern Scotland, and his wife Susan, also 53, are among those stuck in the hotel.

Mrs McHardy told Dr Jones during ITV’s Lorraine that they were supposed to be enjoying a four-day sunshine break to celebrate a birthday but have now been told they will need to stay in Tenerife for at least 14 days.

She added: “We didn’t go out in the beginning but yesterday we went to reception – you are allowed to go out with your masks on.

“At the beginning, we were getting food parcels put to our rooms, but now the only food you can get is at the restaurant so we have to go out now.”

Dr Jones responded to the couple and criticised the isolation measures at the hotel.

He said if somebody was diagnosed on the last day of the 14-day quarantine, the 14-day period would need to start again.

He added: “At the moment, what’s happening in that hotel is not self-isolation because people are sunbathing round the pool, going to the restaurant – you are in a mass quarantine together.

“My worry, and your worry, will be this – that on day 14 when you are ready to come home and somebody tests positive, you’re back in quarantine for another 14 days because you will have been exposed.

“You haven’t been given logical guidance to follow and nor is anybody else adhering to that, even if it was there.

“You could potentially be in quarantine for (another) 14 days if on day 14 somebody tests positive.”

Mr McHardy replied: “It could build and build, when do we ever get home?”

Mrs McHardy said the couple want to come home, even if it meant staying in isolation for another 14 days once back in the UK.

Dr Hilary replied: “You’ve been given guidance that doesn’t really help you because you’ve not been self-isolating.

“If all of you test negative when you leave, fine, you’ve got away with it, it’s been a gamble, but if one of you tests positive you’re back in the same boat because you’ve been together.”

The Foreign Office has no current plans to evacuate the Britons but is keeping the quarantine measures under review with Spanish authorities, and the Consulate in Tenerife has distributed letters to those affected.

One man from Derbyshire, who travelled to the hotel for four nights with his partner, told PA on Thursday: “None of the Brits staying here feel safe”.

The couple were due to fly back on Tuesday but are now being held in quarantine for two weeks.

The 60-year-old said: “We have been told to stay in our rooms but the hotel have no way of enforcing it.

“We have a WhatsApp group for all of the Brits and we don’t feel safe. We think this is going to end up worse than that ship (the Diamond Princess in Japan).

“I don’t think confusion would be the right word to describe it – they are just not able to enforce quarantine conditions.

“People are able to walk around the buildings and some are even going in the pool.

“People are walking about and interacting with each other and not wearing masks.

“They served a buffet-style dinner last night, and people were milling about without masks, touching utensils – the virus is bound to spread.

“It’s totally crazy. We feel we are just being quarantined until we eventually get it.

“No-one seems to be helping, and the consulate aren’t helping us – why can’t they bring us home? We are in a quarantine that is not being followed and it is not safe.

“I ran out of medication and visited the front desk as I was told more would be brought in. But they were unable to find my medication.

“Eventually I was given some but I’ve been told now they won’t give out more than one day’s worth at a time, so I have already run out again and will need to go back. They couldn’t give me any information about why this was.”

According to health officials in the Canary Islands, more than 100 guests could be released in the coming hours, but it was not clear if any Britons were included.

Two security perimeters remain around the hotel, while a “field hospital” has been set up to treat anybody with coronavirus symptoms.

The travel firms Tui and Jet2 Holidays are among those that use the hotel for package holidays.