Ability to produce fluorescent glow ‘may be widespread among amphibians’ 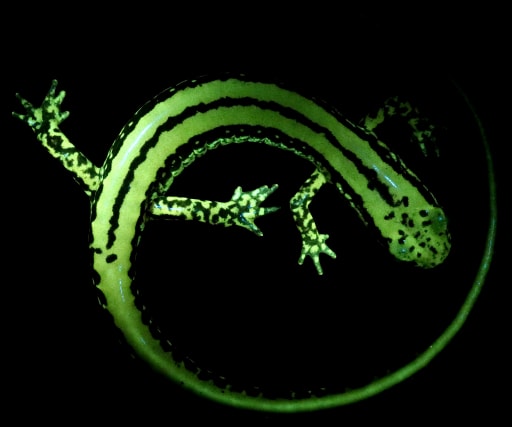 Biofluorescence – the ability to emit a fluorescent glow after absorbing light energy – may be widespread in amphibians, including salamanders and frogs, research suggests.

However, scientists found patterns of fluorescence differ substantially between species, ranging from illuminated blotches and stripes, to bones or all-over fluorescence.

Researchers Jennifer Lamb and Matthew Davis made the discovery by exposing one to five individuals from 32 amphibian species to blue or ultra-violet light and measuring the wavelengths of light emitted by the animals.

They suggest biofluorescence may enable amphibians to locate each other in low-light conditions as their eyes contain rod cells that are sensitive to green or blue light.

It may also create more contrast between the creatures and their environment, allowing them to be more easily detected by other amphibians.

According to the study, published in the Scientific Reports journal, the ability could also help the animals in camouflage, predator mimicry or mate choice, as has been observed in other biofluorescent species.

The authors, from St Cloud State University in America, wrote: “We find that biofluorescence is not restricted to any particular family of salamanders; there is striking variation in their fluorescent patterning, and the primary wavelengths emitted in response to blue excitation light are within the spectrum of green light.

“Widespread biofluorescence across the amphibian radiation is a previously undocumented phenomenon that could have significant ramifications for the ecology and evolution of these diverse and declining vertebrates.