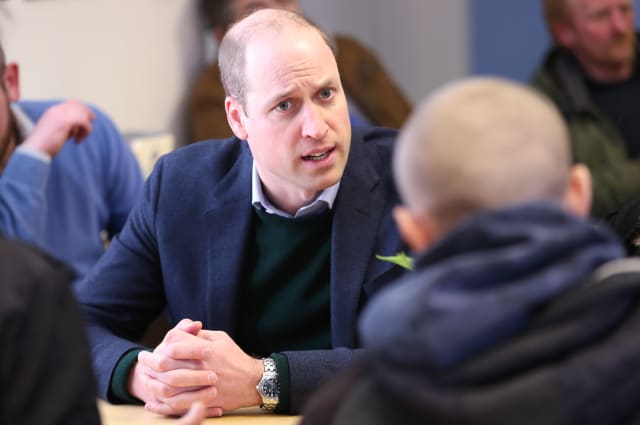 The Duke of Cambridge has heard how a rough sleeper's friend accidentally lost his false leg, as he visited a homeless shelter.

William, who has been patron of homeless charity Centrepoint since 2005, was meeting service-users at The Beacon Project in Mansfield, Nottinghamshire, on Wednesday.

The centre offers a refuge to rough sleepers, including access to housing and health outreach services but also providing the basics like a hot meal, clothing and a place to take a hot shower.

Many of those at the centre have done battle with drug and alcohol addiction, with the prince hearing frank accounts of their struggles and successes.

After hearing from one group, he said: "You can't fix alcohol, drug addiction or mental health in a few weeks – it takes years."

Among those whom the prince spoke to was Delroy Carr, 58, originally from Mansfield, who had to have his right leg amputated above the knee from injecting heroin, 11 years ago.

The ex-serviceman, who once served with the 1st Battalion, Worcestershire and Sherwood Foresters, had the prince laughing as he told how another centre user lost his prosthetic limb.

Mr Carr also told how having been homeless for two years, he was now clean and had got into some assisted accommodation at Christmas – through the centre.

After meeting the prince, Mr Carr, who gets about on crutches, said: "He's a good man."

He added: "I wouldn't have expected him to know as much as he does, he seems very well informed and genuinely seems interested, not like he's putting it on.

"He seems very genuine and really wants to help."

After hearing about his lost leg, the prince told Mr Carr he would personally ensure his details reached the specialist Defence Medical Rehabilitation Centre (DMRC) for ex-service personnel.

Among the services offered, the centre machines and fits prosthetic limbs.

William only visited the facility at Stanford Hall, near Loughborough, earlier this month, and is patron of its charity.

The prince told Mr Carr: "I'll get them the details about your leg, and make sure we pass that on.

The prince was left laughing after listening to Mr Carr's friend and fellow service-user, Daniel Walker, tell how he lost his friends false leg.

Mr Walker, 43, said: "His leg from the hospital rubbed and he was getting really bad sores.

"So I said I'd take it home, put the angle grinder on it.

"I'll change the disk, put some soft on it and run it down a little bit for you.

"I've gone to work, because I worked as a binman, and I've come back and I've gone 'Babe, where's Delly's leg gone?'

"She went 'That horrible thing you left in the garage? – it freaked me out, it's horrible'.

"I said, 'well where is it?', and she went 'dustbin men took it – your mates come round earlier'.

He added: "He's never had one since – nine years.

Mr Walker explained that he and Mr Carr had battled long years of drug addiction, but were now clean.

In a conversation with key workers, the prince had also spoken of how service users told him of their battles with drug addiction.

He said: "The guys were saying coming off heroin is the hardest thing they've had to do, that's the draw (of it), it's just so debilitating."

The prince added: "They know they can do it, they just can't break the cycle."

Phil Myers, an outreach worker with charity Framework who works with rough sleepers at the centre, said homelessness was a "massive problem".

Earlier, William visited a construction training centre where he was meeting apprentices and drove a paving machine.

The prince also had a go on a rock quarrying simulator, and said: "At least I can tell George I've been on a digger."

He was having a tour of Tarmac's new National Skills and Safety Park, on the site of a working quarry near Mansfield, before formally opening the centre.

Describing social mobility as "really important", he said: "I'm here to really listen to the ideas and the challenges and the opportunities that you all think are out there."