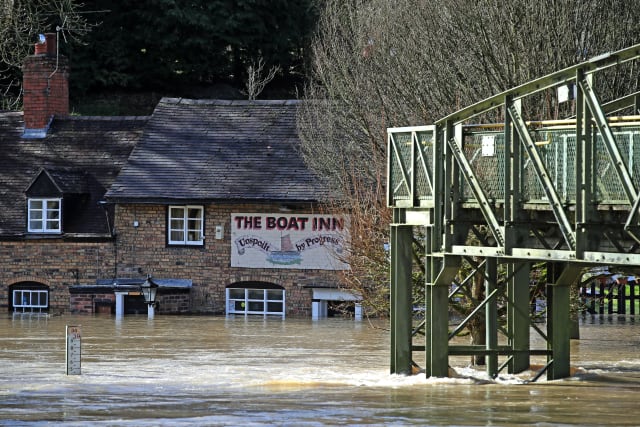 Residents evacuated from properties in Ironbridge due to flooding are facing further misery as wet weather is expected to cause disruption on Thursday.

A yellow weather warning of snow and ice has been issued for much of the Midlands including the River Severn in Shropshire, where flood defences buckled under the pressure of water.

West Mercia Police said on Wednesday evening they were "waiting to see what happens overnight", as officers continued to tell people in the Wharfage to leave their homes and businesses.

Deputy Chief Constable Julian Moss said: "We are waiting to see what happens overnight and we are monitoring closely with colleagues at the Environment Agency, and an operational plan is in place with Shropshire Fire and Rescue should it be required."

A "swathe of wet weather" from the South West is due to push in overnight and into rush hour on Thursday, when two yellow weather warnings of snow have been issued by the Met Office.

Meteorologist Alex Burkill said: "It's not just the snow, there's going to be a fair bit of rainfall mixed in with it.

"It's not going to be large amounts, between 10-15mm of rain in some places, but it could be falling on heavily saturated areas."

Flooding along parts of the River Severn, which remained close to its highest levels in some areas, is likely until at least Sunday, the Environment Agency said.

A severe flood warning covering the river at Wharfage remained in place on Wednesday night, while 92 flood warnings and 132 flood alerts had been issued.

Earlier on Wednesday, police could be seen knocking on doors along the riverside to ensure that residents living on Wharfage had left their homes.

Temporary flood defences had been pushed back towards a pub and other businesses, sparking fears that the defences could be fully breached.

Residents in the Worcestershire town of Bewdley were forced to evacuate earlier after the river spilled over barriers at Beales Corner.

England has received over 200% of its average February rainfall, according to the Environment Agency, with some areas experiencing a month's worth of rain in 24 hours.

Toby Willison, executive director of operations at the Environment Agency, said: "Our operational teams continue to work night and day to protect communities alongside the River Severn, which is experiencing record levels.

"River levels will remain exceptionally high on the Severn for some time and communities, in particular Shrewsbury, Bewdley, Bridgnorth and Ironbridge, should prepare for potentially ongoing severe flooding."

As the Environment Agency said that flooding is expected to continue into the weekend across parts of England, Boris Johnson was criticised by Jeremy Corbyn over his "silent" response to flooding across the country.

But the Prime Minister said he was "proud" of the response by ministers following the recent storms and defended the Government's investment in flood defences.

Operational teams have put up more than 6km of temporary flood barriers across the country and flood defences have protected more than 34,184 properties over the last week.

In East Yorkshire, flood warnings remain in place in the Snaith area, where locals criticised the lack of help they have received from the authorities.

Residents were advised to evacuate on Wednesday afternoon as water from the River Aire and surrounding washlands continued to rise.

Humberside Fire and Rescue Service said that some 100 homes had been affected by flooding, while warnings were out for a further 60 properties in nearby East Cowick.