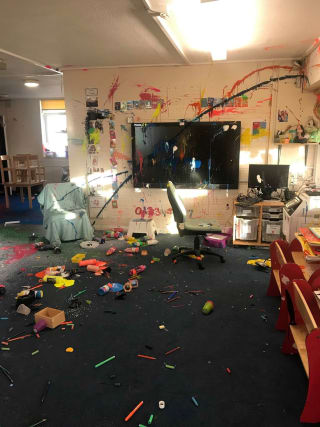 A 14-year-old boy has been arrested in connection with a vandalism attack on a nursery school which suffered thousands of pounds worth of damage.

The extensive damage including paint strewn across the walls was caused during two break-ins at the nursery section of Arundel Court Primary School in Portsmouth, Hampshire, on February 17 and 25.

“Sadly last night our nursery was broken into and horrifically vandalised causing thousands of pounds worth of damage.

“Due to this mindless act, nursery will be closed tomorrow but hopefully we will put some sort of provision in place for Thursday”

The school has since set up a fundraising page to help pay for the repairs and added in a post: “We have been overwhelmed with the support from everyone in the local community and beyond.

“We very much appreciate the kind offers of help, however at this present moment it will take an industrial clean and replacement of equipment to put this right.”

Stephen Morgan, Labour MP for Portsmouth South, has written to Hampshire Police asking for support for the school.

He posted on Twitter: “Following the mindless break in and vandalism at Arundel Court Primary Academy & Nursery overnight, I have today written to the @PompeyPolice district commander to ensure the police do everything in their power to help the nursery in the heart of our city.”

A Hampshire Police spokesman said: “Damage was caused inside the premises and some items were stolen.

“Following our inquiries we have arrested a 14-year-old boy, from Portsmouth, on suspicion of two burglaries.

“He remains in custody at this time.”